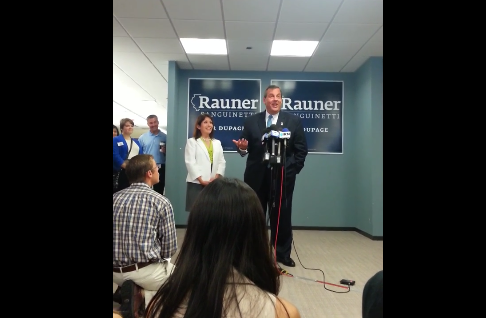 Governor Chris Christie is spending a healthy chunk of his RGA chairmanship (and war chest) in the Land of Lincoln, Save Jerseyans, helping Republican Bruce Rauner finish the job and build on his lead over Democrat incumbent Pat Quinn. It’s all for good reason. As Christie noted during a Monday campaign swing in a conversation with supporters, he detects real parallels between this year’s race in Illinois and his own in 2009 against Jon Corzine.

Turning one of America’s bluest states red would also be a huge feather in Chris Christie’s cap heading into 2016 when, again, Illinois might prove as crucial to his delegate count as it did for Mitt Romney in 2012. He can’t run nationally on taking back the N.J. legislature or an unimpeachable conservative track record; his team does want to make the point that he’s a party-builder and Illinois is one of the places they’d like to point throughout 2015 and beyond. It’s a “point of contrast.”