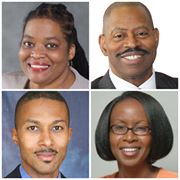 We always hear about how the Republican Party generally “lacks diversity” and, in many ways, this is true. But you and I know that we’re still the Party of Lincoln, Save Jerseyans, and this year in New Jersey, the group of men and women running for seats in the U.S. House of Representatives is very diverse in every sense of the word.

It was on full display at Wednesday evening’s birthday-themed NJ GOP fundraiser in East Brunswick (though it continues to go largely unreported by the mainstream media crowd).

You already know the incumbents, and we’ve written quite a bit about our friends Tom MacArthur, Garry Cobb and Alieta Eck here at Save Jersey.

Some others with whom you might be less familiar?

Anthony Wilkinson (CD6) is a graduate of Yale Law, a former high school teacher and current adjunct professor. He serves as an Educational Consultant to the Seton Hall University Academy for Urban Transformation and is also a Volunteer Teacher at the Monmouth Worship Center in Marlboro, NJ. Wilkinson, who is running against Democrat incumbent Frank Pallone, has centered his campaign on fiscal and social conservatism.

Dr. Dierdre Paul (CD9) is a graduate of Teachers College at Columbia University and has an extensive background in education, with over 20 years teaching experience. Prior to her current bid for U.S. Congress, Dr. Paul ran for NJ Assembly back 2013. Dr. Paul left the Democrat party in 2013 has since embraced fiscal conservatism.

Jude-Anthony Tiscornia, running in CD8, is a practicing attorney who earned a B.A. in History and Political Science from Rutgers University and, later, a law degree from the Thomas M. Cooley Law School. Yolanda Dentley (CD10) has spent 25 years teaching, and later serving as an administrator, in urban school districts. She earned a Bachelor’s Degree from Upsala College and a Masters Degree in Educational Administration from Kean University.

There’s obviously a LOT more to tell about these folks, Save Jerseyans, but I encourage you to take the time to learn more on your own and, if you’re in the district, offer to knock some doors/make a few calls on their behalf.

They’re putting their butts on the line in TOUGH districts. New Jersey’s gerrymandered districts make pick-ups an uphill climb in any cycle, it’s true. This year, however, we’re facing a Democrat Party that’s hemorrhaging support even here in New Jersey.

Like most conservatives, I’m loathe to drone on and on about diversity as if it is a good unto itself; I was raised to work for a point in time when everyone in America, including candidates for office, “will not be judged by the color of their skin, but by the content of their character.” But the messenger matters as much as the message in politics, Save Jerseyans, and its important to make inroads in every community if we want the party to grow and the country to prosper. The first step? Recruit quality ambassadors.

Extreme Obama fatigue translates to a major historic opportunity to build up the party’s grassroots through these campaigns; let’s not waste it!