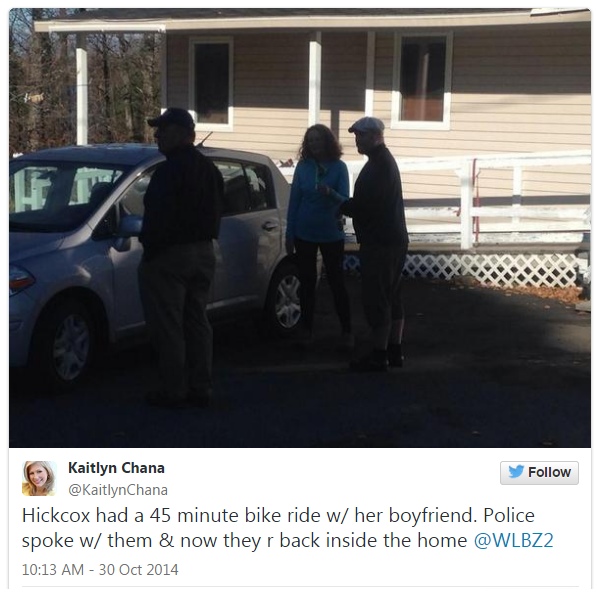 This lady is a real trip, Save Jerseyans!

I’ve spoken to the nurses in my life since Kaci “the Brat” Hickox‘s story went viral; not one of them thinks it’s unreasonable, after an extended journey to Africa interacting one-on-one with Ebola patients, for a health care worker to spend 3-weeks in a hospital (or at home) to guarantee that this deadly virus doesn’t spread.

It’s not hard for anyone who isn’t a narcissist to understand why.

After all, the CDC was EGREGIOUSLY wrong – time and time again – when it came to this disease (1) coming to America and (2) the risk to health care workers caring for the infected. Ebola isn’t 100% understood and the “experts” continue to contradict themselves; researchers disagree, for example, on a few key points including the all-important incubation period.

But then again, most of nurses in my life aren’t nasty liberals who care more about making political points than protecting the American people. Check out what she did today:

Hickcox had a 45 minute bike ride w/ her boyfriend. Police spoke w/ them & now they r back inside the home @WLBZ2 pic.twitter.com/hUZXFnXlNP

And the truly ironic part?

The Obama Administration’s CDC and its surrogates, including the media and Nurse Hickox, have decried Gov. Christie for basing his quarantine position on bad science.

Guess what happened in the last 24 hours?

The Obama DOD ordered a 21-day quarantine for U.S. troops combating the Ebola outbreak in Western Africa. Again, like Christie, they’re not pulling random people off the street for sneezing. They’re making a sacrifice to protect the homeland while we guarantee that these brave folks aren’t a risk to their friends, family and neighbors.

Like Governor Christie said, “if it’s good enough for our men and women in uniform,” then why does Hickox think she deserves to go bike riding with her boyfriend? A damn good question! One which Republicans everywhere should raise.