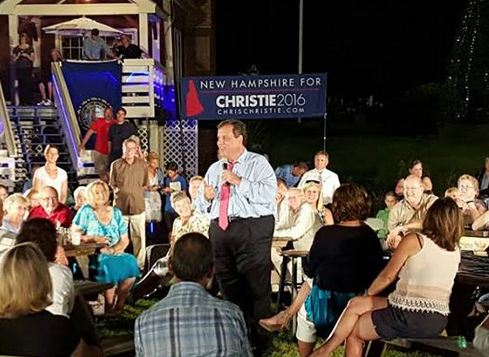 The media is searching for new story lines in this cycle’s unusually long and crowded primary season, Save Jerseyans, and this month it’s a Chris Christie comeback in do-or-die New Hampshire.

“Don’t call it a comeback: Christie’s been here for years” crowed the Union Leader, the Granite State’s paper of record, on Monday.

“For a couple of months we have noted that New Jersey Gov. Chris Christie is performing better than his poll numbers reflected,” WashPo‘s Jennifer Rubin explained, also last week. “He had two good debate performances. He has put out meaty plans on national security, entitlement reform, and tax reform. In TV interviews he has been relaxed and up-to-speed on foreign policy, as he was again on Sunday on ABC.”

Okay. And for all we know they’re right. There are three months left to go before Iowa votes. A lot can change in that time.

But will it? There are, after all, only three months left to go before caucus and primary voters across the fruited plains begin to weigh in, and this is what we KNOW (not suspect based off of anecdotal observations) so far:

The race has been remarkably stable for awhile now.

Let’s look at New Hampshire to keep it simple, and since that’s where even the Governor openly admits he needs to break out, it’s frankly all that matters for this post. Look at the RCP average.

Donald Trump has led consistently in every major public poll since mid-July 2015. He led by 12-points in a July Monmouth poll and by 11 points two-months later. While there’s been some change in the 2nd and 3rd tier spots and further down ballot (Christie is currently in 8th place), what’s also interesting and worth remembering is how the “outsiders” (Trump, Carson and Fiorina) combine for a whopping 50% of the NH GOP vote in the RCP average. None of the “insiders” like Bush or Christie have been able to come close to breaking through that wall despite historically strong fundraising and, in Christie’s case, a LOT of time on the ground.

More to the point, Rubin is 100% wrong about Christie’s polling. Christie hasn’t really changed position at all since early 2015, in February and March, when he was polling in the low-double digits and then fell into single digit range. NBC/Marist had him at 6% back in July 2015 when Trump took off and Scott Walker was still in the race. Now? The late-September NBC poll cited by media and allies as evidence of a comeback has Christie at…. 7%. The newest poll and only current October 2015 poll result from Gravis put him at 3%.

Remarkable he’s still fighting given the odds stacked against his candidacy? Sure.

Do we have any objective data supporting the comeback narrative? No.

We’ll see what happens at the end of October when GOP candidates meet once again for yet another crowded debate. I don’t know how Christie can do better than he has already, and those strong performances have yielded NO significant changes for him. I’m not gloating or anything. In fact, regular Save Jersey readers know I was arguing for folks NOT to count this guy out back before it was cool (again?). By the same token, I’m a big believer in sticking to the facts, and what we KNOW, not just what we hope or suspect, in the sport of media expectation-setting.

“Make no mistake: Christie has an uphill climb,” Rubin concluded, and that’s good because, respectfully, it’s the only conclusory aspect of her piece that isn’t purely speculative.

17 thoughts on “Christie comeback? Still possible but not yet.”