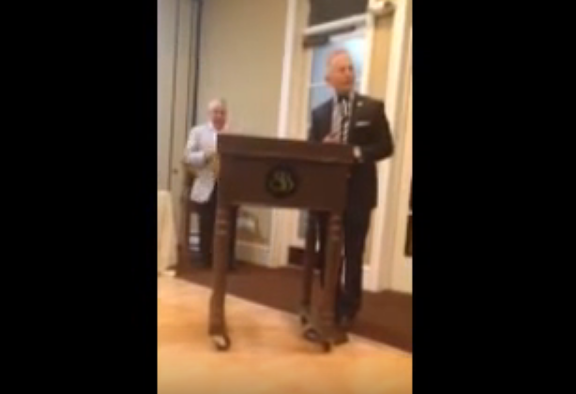 Hiding behind a mountain of Super PAC cash, LD1 Democrat Assembly candidates Bob Andrzejczak (an incumbent) and Bruce Land have been invisible all season, Save Jerseyans. They don’t show up to events, turning down interviews, avoid confrontations with their opponents, and cower behind the “Team Van Drew” label rather than submit themselves directly to the voters’ scrutiny.

It’s gotten to the point where Assemblyman Sam Fiocchi and his running mate, Cumberland County Freeholder Jim Sauro, have taken to carrying around cardboard cutouts of Andrzejczak and Land as a joke. Still, there’s not much funny about the decidedly un-democratic behavior of the Democrat ticket.

That behavior keeps getting more egregious by the hour, and LD1 voters need to take notice if quality of representation in Trenton still matters to them. On Wednesday night at the Middle Township Chamber of Commerce’s candidate forum, Andrzejczak was a last minute scratch from the event. Who did show up in his place? You guessed it: the puppet master, State Senator Jeff Van Drew.

And his comments were gross:

Frankly, Save Jerseyans, for the purposes of analyzing this Assembly race, it doesn’t matter if Van Drew gave a truthful excuse or not for his absent underling. The war record speaks for itself, certainly, along with Van Drew’s signature war revivals he gives at every stump in lieu of letting Bob talk, but similarly so does what’s been happening on the ground in the battle for LD1.

Let’s talk candidly: Andrzejczak, whom Van Drew insists on referring to as Sgt. Bob instead of his proper current legislative title for patently obvious reasons, has been ducking voters and media since he’s been in office; it didn’t begin with Wednesday’s event. And it’s for a reason. Ask anyone down in LD1 with any level of political or governmental knowledge and they’ll tell you that Andrzejczak, while an amiable enough guy with a laudable military record, isn’t the one you’d ever approach to get anything done. The guy doesn’t talk for himself. Ever! Because he can’t talk without a script approved by Van Drew.

Am I wrong? Andrzejczak is welcome to show up at the next forum on Monday, hosted by the League of Woman Voters, and give voters a performance that makes me eat my hat.

I’d be waiting in vain, of course. The Van Drew charade is disgusting, manipulative, and yes, extremely disrespectful of two veterans who clearly don’t know, or mind, that they’re being turned into props. ‘Sgt. Bob’ served his country and deserved to be treated with respect on the home front by his home district’s political leaders. ‘Bob Andrzejczak the Candidate’ is being nakedly and openly mistreated by Van Drew as a walking, talking flag, in which to wrap himself at election time. To make matters worse, Andrzejczak lacks both a private sector record of accomplishment and a distinguished legislative portfolio from term one with which he could’ve developed a little independence from the state senator and his sponsoring machine. That’s why the Machine wanted him in the first place. They don’t rent, Save Jerseyans. They OWN.

All of this nuttiness is a large part of the reason why a small army of decorated LD1 veterans have endorsed Fiocchi and Sauro over Andrzejczak and Land, another veteran. They’re sick and tired of watching these men be used and abused by a smug career politician like Van Drew with a bad fake tan and disconcertingly-tight shirts for a man of his age and station.

Here’s hoping LD1 voters share their revulsion and take it to the polls on November 3rd to end these shenanigans once and for all. New Jersey’s problems are too big for Jeff Van Drew’s cheap dinner theater antics. We all deserve better. So do Bob Andrzejczak and Bruce Land! As do all of the American veterans living in this state who want and need real representation.