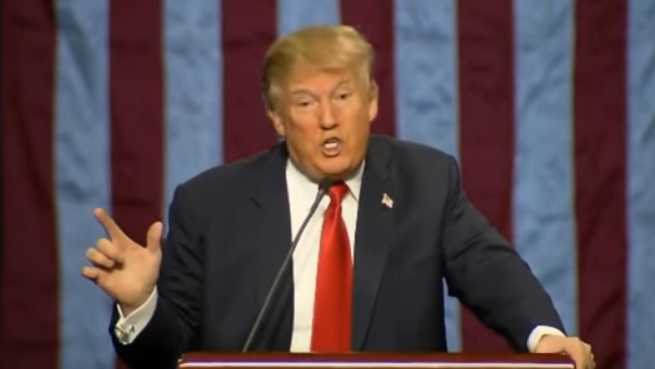 Does lying about a problem to score political points serve the solution, Save Jerseyans?

On Saturday, the Donald held a campaign rally in Birmingham, Alabama, and during one of his patented rambling rants, he made an extraordinary claims about 9/11 and… the State of New Jersey.

It’s a claim he then repeated when challenged on Sunday’s “This Week With George Stephanopoulos” program:

What’s really not good is Trump’s penchant for making shit up.

9/11 hijacker links to Jersey City and Paterson don’t equate to “thousands” cheering in the streets. In fact, Politifact conducted the research and couldn’t find a single well-sourced report of 9/11 celebrations while also making the very good point that “[i]f thousands and thousands of people were celebrating the 9/11 attacks on American soil, many people beyond Trump would remember it. And in the 21st century, there would be video or visual evidence.“

Trump naturally has none ’cause it doesn’t exist. He’s a master huckster who knows what his audience wants to hear and doesn’t care if facts need to be manipulated (or in this case invented from scratch) to make the sale. The Donald didn’t just embellish – he slandered New Jersey, which suffered terribly on 9/11, to win votes. To make matter worse, lying about domestic terror sympathizers only makes the folks we need to persuade about the very real dangers of real domestic terrorism all the less likely to believe us.

Is this the best we can do next fall, Save Jerseyans? Better yet, can we afford to do this poorly? Let’s hope not.