Marco Rubio and Chris Christie are fighting for second place in New Hampshire this holiday season, Save Jerseyans, so it’s to be expected that they’d start dropping some less-than-festive elbows. The state could prove a do-or-die hurdle for both men. Christie and Trump at least are starting to act like it.

But the Governor’s latest line of attack just doesn’t pass the laugh test so I’ve got to cry foul.

It’s actually not the first time he said went after Rubio on this point, dismissing the Senator’s explanation as “baloney” back before Christmas, but this latest criticism was the most personal yet.

“So I’m like this is great, Marco’s opposed to this. That’s good. So I can’t wait to turn on C-SPAN2 because he gives a good speech, Marco, and I want to hear his stirring speech that’s going to try to persuade people on the floor of the Senate not to vote for this awful spending bill — except he never showed up,” Christie, discussing Rubio’s missed omnibus bill vote, told a town hall audience. “Dude, show up to work and vote no. Right, just show up to work and vote no. And like if you don’t want to, then quit.”

Com’on, Guv! Love ya but seriously?

This is common knowledge: as of August 2015, Governor Christie had been out-of-state (mostly campaigning for president) a full 5 days out of every 9 year-to-date. Lieutenant Governor Kim Guadagno has had a very active year. And while New Jersey’s litany of problems preexisted his time in office, and the Democrat composition of the legislature limits his governing options, there are plenty of issues for where the country’s most powerful Governor, armed with executive orders and a line-item veto, could make a bigger difference were he more engaged. 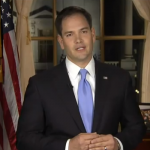 You could also argue (I have) that Governor Christie could’ve helped at least decrease Democrat majorities in both legislative chambers notwithstanding the shitty redistricting map had he spent more time working New Jersey than campaigning nationally since 2011.

You may not like Donald Trump – I’m not a fan! – but he wasn’t wrong the other day at least insofar as when he pointed out that lots of the Governor’s constituents have tired of his travel schedule, one which they fronted some serious cash to subsidize.

Now, with all of that being said, I’m not saying Rubio’s voting record isn’t fair game. For what it’s worth, the truth is a lot more complicated than his competitors would lead you to believe; Ted Cruz, for example, missed 70% of votes held in April. Still, what is a politician worth if not his or her record on the job?

But that’s exactly why Chris Christie should steer far clear of the specific ‘missing from work’ attack. He has no room to talk.

The Governor has an outside chance but a real chance at winning New Hampshire. He’s made some waves in the debates by chastising other candidates’ for “childish” bickering. Going after Marco Rubio over missed votes when Chris Christie has practically relocated to New Hampshire is as off-message as it is kind of goofy in context.