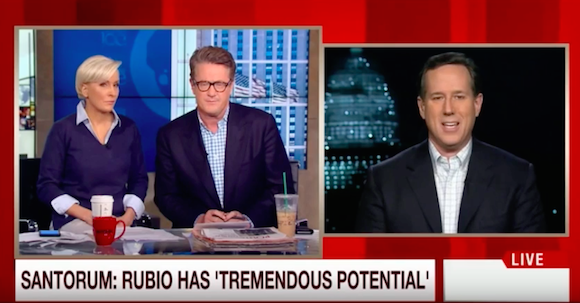 Governor Chris Christie‘s presidential campaign continued to throw the kitchen sink at Marco Rubio on Thursday afternoon, Save Jerseyans, even as new polling out of New Hampshire suggested that the New Jerseyan’s comeback efforts had stalled.

Unsurprisingly, then, the latest salvo took the form of a new ad capitalizing on the botched Rubio endorsement of Rick Santorum:

JOE SCARBOROUGH: What do you list as Marco Rubio’s top accomplishment that made you decide to endorse him?

RICK SANTORUM: There’s is a guy who’s been able to number one win a tough election in Florida.

SCARBOROUGH: Can you name his top accomplishment?

SANTORUM: My feeling on Marco is someone who has tremendous potential, tremendous gifts. I guess it’s hard to say there are accomplishments.

SANTORUM: The Republicans have been in the majority for one year and one month, of which, as you know, he was running for president primarily.

SCARBOROUGH: Just one, that Marco achieved. Maybe a bill that he wrote.

SANTORUM: Can’t point to him and say “Nothing got done therefore he has no accomplishments.” This is a bogus argument.

SCARBOROUGH: All I’m asking is a simple question. List one accomplishment that Marco Rubio has achieved in four years of the United States Senate?

SANTORUM: The bottom line is – there isn’t a whole lot of accomplishments, Joe. And I just don’t think it’s a fair question.