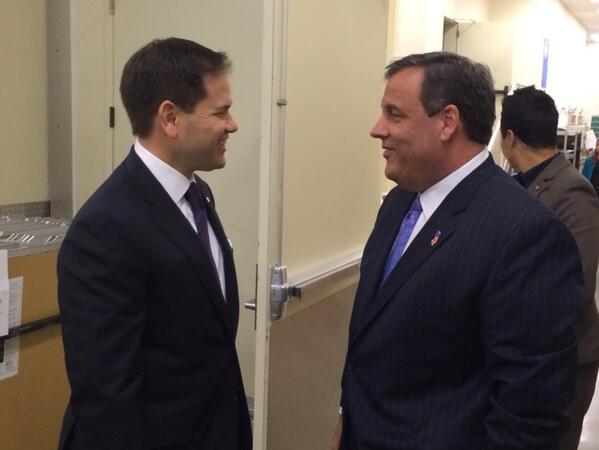 Some Valentine’s Day-appropriate news, Save Jerseyans:

Governor Chris Christie‘s political “suicide” attack in the last debate before New Hampshire may have helped end his own candidacy while simultaneously injuring that of Florida’s Marco Rubio.

According to POLITICO, Rubio is nevertheless trying to put it all behind them by reaching out to Christie by phone. Rubio told reporters on Sunday in South Carolina that he hadn’t yet been able to reach the New Jerseyan but he did try to call and stressed he had “no animus toward Chris.”

Oh, to be a fly on the wall when they finally connect!

Both men once enjoyed a cordial relationship, even staying together at Mitt Romney’s New Hampshire compound for part of the 2015 Independence Day holiday weekend. The Governor had no public schedule over the weekend but he will reemerge no later than Tuesday afternoon to deliver his second-to-last budget speech to the New Jersey Legislature.

There’s been no indication to date when – or if – the Governor will endorse one of his formal 2016 nomination fight rivals. His cred with the base has been stronger but he is still correctly viewed as a strong fundraiser and, as Senator Rubio found out first hand, a tenacious and effective attack dog on the campaign trail.

3 thoughts on “REPORT: Rubio tries to make peace with Christie”