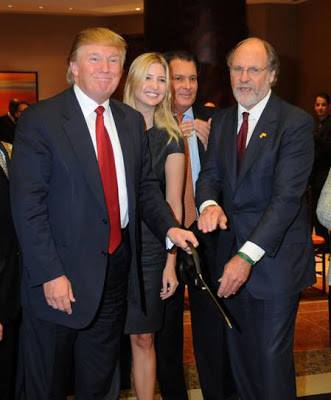 If you enjoy Donald Trump because he isn’t politically correct then more power to you, Save Jerseyans. Making fun of the handicap and U.S. prisoners of war is actually more cruel than un-PC but whatever. It’s a free country. You have every right to be wrong.

But to pretend he’s some kind of “outsider” whose election would represent a departure from business-as-usual in Washington, D.C.?

For starters, right here at home in the great Garden State, Donald Trump’s “great company” we’re always hearing about is a big part of the reason why New Jersey’s toll roads are astronomically expensive to drive.

Flash back to October 2008 when then-Governor Jon “M-F’n Global” Corzine signed off a New Jersey Turnpike Authority two-phase toll increase. Phase one of the toll hikes began on December 1st of that year with massive 40% and 43% increases on the New Jersey Turnpike and the Garden State Parkway, respectively. Then Phase 2 hit in January 2012 with a 50% hike for both toll roads, saddling Governor Christie with plenty of angry commuters years after Corzine left office and stood watch while American farmers were bilked out of their life savings.

For our story, it’s relevant to know that the push for increases all began with the 17-member ‘The Financial Restructuring and Debt Reduction Campaign Steering Committee’ formed several months earlier in January 2008, a little over one year before Chris Christie formally announced his intent to seek the GOP’s gubernatorial nomination. The group’s specific intent? To advocate for the Governor’s “debt restructuring plan” that centered on toll hikes. So in other words, Trenton paying for its mess with more of our money.

All of this should sound VERY familiar in the context of the current gas tax push. But I digress….

“I’m proud that this group of individuals, who represent the highest echelons of some of the most important aspects of our society, have the foresight and courage to join me in restructuring New Jersey’s fiscal future,” Corzine crowed at the time. “These individuals agree that by paying down half of our state’s debt and implementing new spending restrictions we can get off the road of financial ruin and back on track towards a better future.”

One of those 17 individuals from the highest echelons?

“The Casino Association of New Jersey is encouraged by the general principles of the Governor’s Plan and endorses its focus on creating longer term fiscal stability for the citizens of the state and the business community,” said Juliano in a Corzine release announcing the committee’s formation. “A freeze on government spending, limiting future spending to revenue growth, creating a fund for transportation improvements throughout the state and limiting future borrowing without voter approval are all critical components to putting the state on the right financial track.”

He’s currently the president of Sands Casino Resort Bethlehem, coaxing gamblers and workers to skip the Jersey toll roads and gamble in neighboring Pennsylvania. How is Trump doing so well in South Jersey again?

We know the answer. You see, folks, Trump loves to talk about his business success – much of it exaggerated – and leaves out key details by design. “I play to people’s fantasies,” Trump wrote in The Art of the Deal. “I call it truthful hyperbole. It’s an innocent form of exaggeration — and a very effective form of promotion.” Trump University students and Trump’s Steaks victims know all about it.

Yet his followers don’t mind that he’s “cut deals” with liberals and worked with both sides of the aisle. It’s part of the fantasy. A popular myth not totally indifferent from Paul Bunyan.

If more of them knew that they’re STILL PAYING for many of the Donald’s negotiations? Every single time they commute to work, for example?