MacArthur steps up assault on FEMA corruption with whistleblower presser 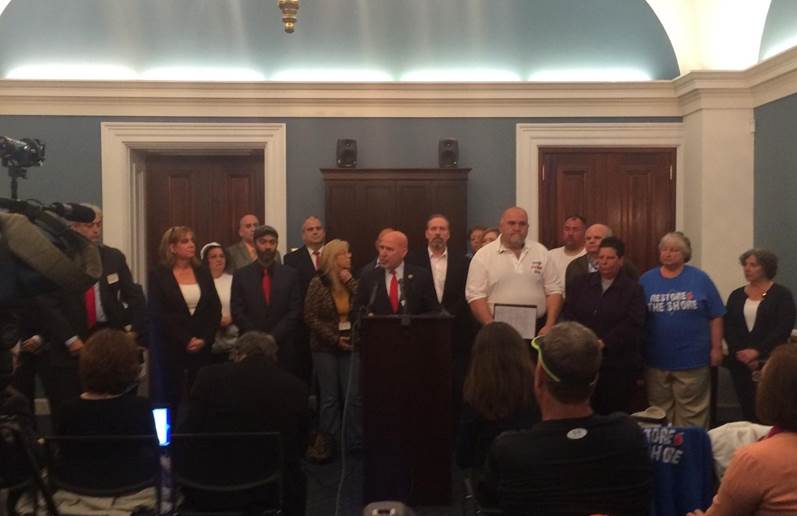 Tom MacArthur (R, NJ-03) has already called for the head of FEMA’s resignation and congressional hearings over rampant fraud and corruption related to the Superstorm Sandy claims process, Save Jerseyans, but not content to wait for others to act, the Congressman held an unusual presser on Thursday.

Why unusual? He was flanked on Capitol Hill by a small army of FEMA employees-turned-whistleblowers who can attest to a ritualized screw job being executed against New Jersey & New York homeowner victims.

“Today my office has unveiled FEMA whistleblowers that were directly involved with flood insurance claims following the devastation of Hurricane Sandy. Their brave move to come forward exposes a systemic effort by FEMA to wrongfully deny the claims of Sandy victims,” explained MacArthur, whose district encompasses most of Ocean County. “This provides our office the catalyst needed to demand a thorough and independent investigation into this matter. FEMA has failed to provide the appropriate oversight and controls necessary to assist the most vulnerable victims. My constituents have been wronged, and they deserve justice. The federal government cannot and should not be immune to the consequences of their actions.”

One such whistleblower was Jeff Coolidge, a former manager for OST Inc. He explained how he was required to either deny or underpay nearly 1,000 Sandy claims over the course of four months.

“I left the Sandy review process because it is a sham,” he said. “I was literally losing sleep because I didn’t want to be a part of that fraud anymore.”

Victims recently got a boost from a March 2015 installment of CBS’s “60 Minutes” in which a senior FEMA official admitted that thousands of Superstorm Sandy victims had been wrongfully denied insurance claims during the tenure of FEMA Administrator W. Craig Fugate.

A released investigatory report uncovered not just waste, fraud and abuse but also helped ellicit affidavits from more whistleblowers, with one even citing and “elaborate process designed to justify minimal payments to policyholders irrespective of the actual merits of their claims.”