Somerset County Assemblyman Jack Ciattarelli (R-16) hasn’t made any public moves but everyone who watches N.J. politics closely knows that the fiercely-independent Republican legislator and frequent Christie critic is actively mulling it over.

Where do they stand on this budget season’s dominant issue: the transportation trust fund/gas tax fix debate?

“We’re decreasing a tax that affects all New Jerseyans to justify increasing a tax that affects all New Jerseyans,” Ciattarelli, who opposes both the Assembly AND Senate proposals, recently told tapinto.net. “The trade-off seems like a shell game. Factor in our structural budget deficits, I voted ‘no.’ Fiscally speaking, I fear we’re only digging a deeper and deeper hole, the sides of which could soon cave in.”

The exceptionally-affable Guadagno in the front runner but her political situation is more precarious than her potential rivals since the LG’s boss, Governor Chris Christie, has thrown in behind the General Assembly’s plan to increase the gas tax by 23-cents effective July 1st while simultaneously promising to lower the sales tax in 2018.

However, in recent days, careful observers have noticed that she has subtly indicated solidarity (if not open support) for gas tax hike opponents; for example, on Thursday as the State Senate deliberated behind closed doors, she “liked” this Save Jersey-shared anti-gas tax meme retweeted by the ardently anti-gas tax Assemblyman Jay Webber (R-Morris): 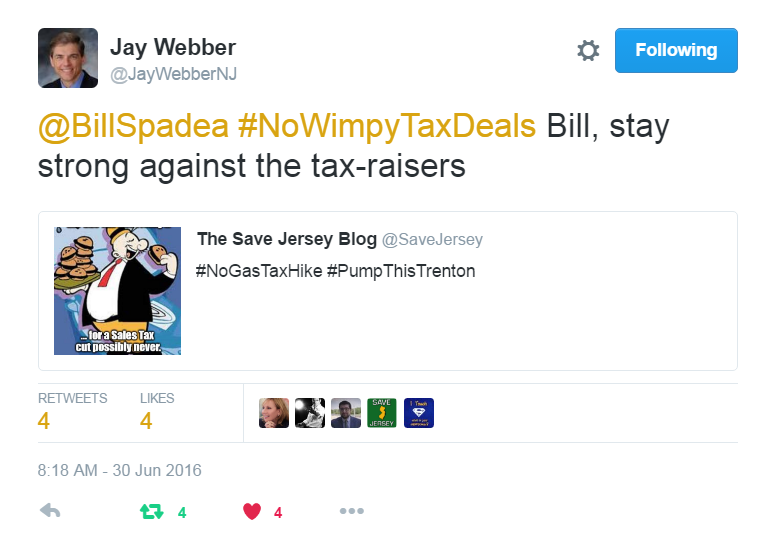 Meanwhile, since he’s not a Trenton politician and splits his time running his bustling South Jersey township and serving as kicking coach for the NFL’s Baltimore Ravens, Mayor Brown hasn’t had as many opportunities to directly weigh-in on the gas tax hike.

What we do know? Back in November 2015, when Democrat gubernatorial candidate Phil Murphy indicated he would support a gas tax bump, the anything-but-shy veteran Mayor slammed him on Twitter as “another tax and spend liberal”….

(D)Guv Candidate Murphy just stated he is in favor of a statewide gas tax! Shocking another tax and spend liberal!@SaveJersey @PolitickerNJ

I was able to touch base with Mayor Brown (who is out of town) and he was no less ambiguous than he has been in the past.

“I know what it’s like on the local level to have to live within your means, and the Democrat legislature has never taken the time to go through its budget,” he told me. “As Republicans, why would we let them off the hook?”