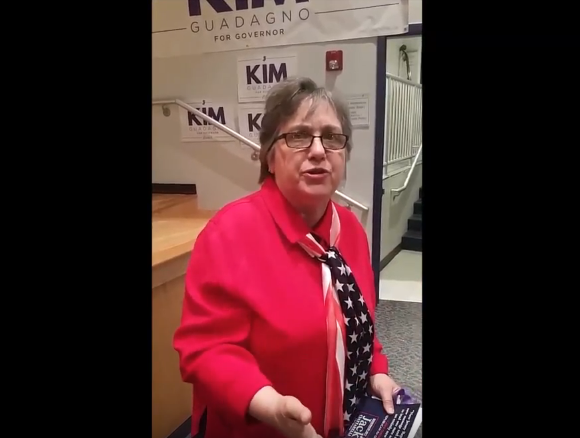 By all accounts, Save Jerseyans?

The bad news: Panos’s endorsed gubernatorial candidate (Kim Guadagno) and political patron/incumbent State Senator (Sam Thompson) both lost their convention battles by fairly wide margins, a situation that’s difficult for any chair to weather. Based on my conversations with dozens of convention-goers, the results appeared to have less to do with the candidates themselves than a all-out, Old Bridge-led party revolt against Panos and Thompson, her predecessor as county chairman. The Old Bridge discontent, of which Thompson challenger and municipal chairman Art Haney is the tip of the spear, has spread to other towns, too.

It’s not a pretty situation and it’s likely to remain unresolved past June.

Panos, for her part, is an Old Bridge Councilwoman, and she’s been the focus of serious allegations from Old Bridge council colleagues in recent weeks. Thompson boasts a numerical line advantage but Bill Layton’s powerful Burlington County organization is backing Haney’s challenge in an effort to even the score and poach votes in Monmouth and Ocean portions of the district. Uncertain times lie ahead.

Chairwoman Panos spoke to me before (and after – see below) the convention voting to give her side of the story, outlining her many efforts to reach out to the Middlesex GOP dissidents and explaining, in her characteristically hard-boiled tone, why she believes the LD12 Haney supporters did a disservice to Central Jersey Republicans.

BTW – the question you hear in this video is a Matt Friedman (Politico-New Jersey) cameo: