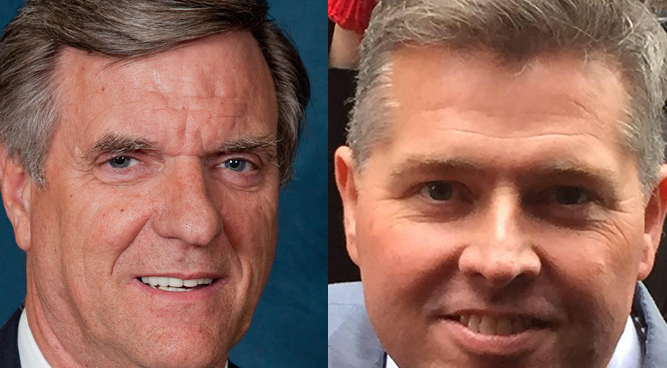 Matters went from bad to worse today in N.J. GOP land, Save Jerseyans, as the civil war for control of the post-Chris Christie state party spilled into the open one day after a failed attempt by Guadagno forces to oust Jack Ciattatelli from the June ballot.

The man throwing the proverbial grenades was Bill Layton, the powerful Burlington County GOP Chairman who’s become unofficial but widely-acknowledged leader of the pro-Ciattarelli segment of the Republican establishment.

“The Lt. Governor should be embarrassed,” said Layton in a statement. “This bogus challenge proves how panicked she and her team are about the primary. Frankly, that a two-term Lt. Governor is in such a weak position coming out of the conventions speaks volumes about her candidacy.”

“She should also be embarrassed by the phony fraud allegations made against a few young Republican staffers and volunteers,” he continued. “The Lt. Governor is willing to go after them, but sees nothing wrong with herself traveling the state side-by-side with a political boss under federal investigation, who owes millions in taxes to the IRS?”

Layton’s remarks are a clear reference to CD3 rival George Gilmore, chairman of the Ocean County GOP who is reportedly under investigation by the FBI. Gilmore has been seen at most of Guadagno’s convention appearances over the last couple months either conferencing with pro-Guadagno figures or attempting to whip votes.

On Monday, both leading GOP  gubernatorial campaigns withdrew ballot changes after oral argument before a N.J. administrative judge, but both sides continue to accuse one another of signature deceit well after the proceedings concluded.

“Frankly, this whole challenge feels like a distraction by the Guadagno campaign to get the focus off of her problems, and on to something else.  It is already backfiring,” Layton insisted.

The Guadagno campaign returned fire in due course.

“This is just another ‘Jack attack’ after they failed in their own challenge to our signatures,” said Guadagno campaign spokesman Ricky Diaz in a statement shared with Save Jersey. “Stuck in the low single digits in the polls and running on a plan to raise income taxes on New Jerseyans by $600 million, all the Assemblyman and his lobbyist supporters can do is attack the Lieutenant Governor. Their campaign barely submitted the necessary number of signatures to get on the ballot and is struggling to get their act together. We’re leading in fundraising, endorsements and the polls because the lieutenant governor is focused on the issues New Jerseyans care about: lowering taxes, auditing Trenton and making our state more affordable for families.”