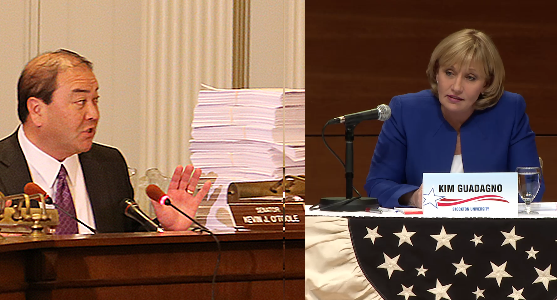 The N.J. GOP’s uncivil war is far from over, Save Jerseyans.

On Thursday, during a session of the Senate Judiciary Committee, Democratic Committee Chairman Nicholas Scutari declared that he may use subpoena power to compel the testimony of Lt. Governor Kim Guadagno, the N.J. GOP 2017 gubernatorial nominee.

Scutari lowered the boom during Thursday’s confirmation hearing for Trudy Steinhardt, state parole board nominee and the wife of Warren County Republican Chairman Doug Steinhardt. Steinhardt had been a Guadagno primary endorser and Guadagno’s choice for N.J. GOP chairman until he was subbed out at the last minute for attorney Michael Lavery, nephew Ocean County GOP Chairman George Gilmore.

Steinhardt had been seen as a “consensus” choice between the warring factions. Now outgoing Republican State Senator Kevin O’Toole, a Christie ally and committee member who’s leaving the Senate soon to take a Port Authority post, openly alleged that Guadagno told Steinhardt to choose either an N.J. GOP for himself or a plum gig for his significant other.

“If that was put to me and I had to make a decision like that, my wife would slap me in the face,” O’Toole reportedly said per POLITICO NJ’s Matt Friedman. “I think we are out of the dark ages where you husband decides your future… [w]e need an explanation because we cannot condone or tolerate when any of our leaders puts a question like that: You chose what’s good for you politically or your wife as a career. It is a disgrace, and I want an answer … from the lieutenant governor.”

Personal? Political? Moral? Or something else?

Either way, it’s more evidence that Guadagno is having a hell of a time rallying the party’s establishment as Christie donors read the polls and bolt to Democrat Phil Murphy’s camp.