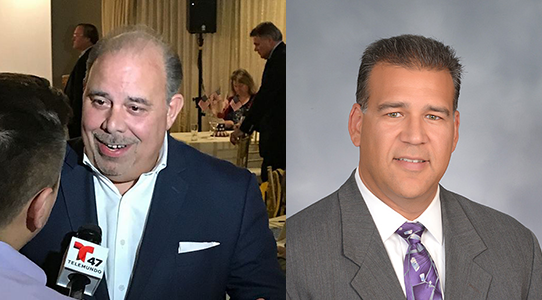 While Kim Guadagno’s choice of running mates is getting a significant amount of attention, Save Jerseyans, like we told you before the primary, the battle for control of the NJGOP is what the gubernatorial primary race was really all about.

We’ll soon begin to learn what a Guadagno win means; newly elected and re-upped state committee members will gather on June 13th to select a new chairman of the beleaguered state party.

Heading into the weekend before the gathering? Nothing is certain but two names are dominating the conversation.

One is Jose Arango, the “Chair of Chairs” out of Hudson County who served a brief stint in the General Assembly in the 1980s and spent the 2017 cycle as an exceptionally vocal Guadagno booster. He’s also a close ally of Ocean County GOP Chairman George Gilmore and his bloc of state Republican county chairmen.

In the other corner? Doug Steinhardt, 13-year chairman of the Warren County GOP and a partner at the politically powerful Florio Perruci Steinhardt and Fader. He backed Guadagno, too, but maintains close relationships with Christie World and the chairmen who bolted and went with Jack Ciattarelli ahead of Tuesday’s primary election.

Other names are in the mix, too, including some of the LG’s Monmouth County allies, but our sources report that Arango and Steinhardt offer the state committee members a clear choice between an enthusiastic hard-line Guadagno backer and an experienced consensus candidate, a choice which they’ll continue to hash out while the rest of us enjoy the weekend weather and take a much needed break from the onslaught of mailers and robocalls.