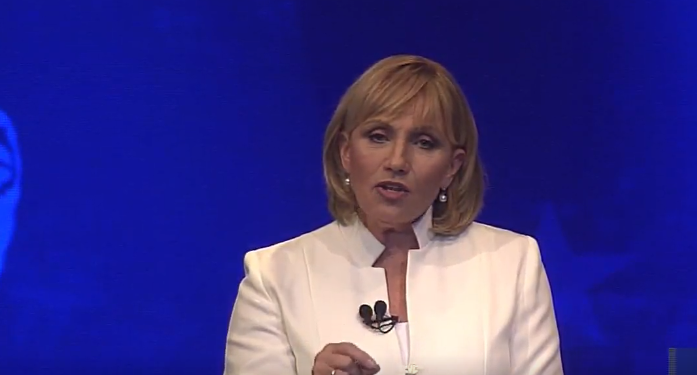 Offered in no particular order ahead of tonight’s big debate:

(1) Emphasize Phil Murphy’s $1.3B tax hike pledge; there’s a brand new report just out today confirmed we’re (still) America’s worst biz tax climate. How can he justify making it worse? Her “only Phil Murphy can afford to live in a Phil Murphy-run N.J.” line is under-utilized. Use it tonight… often.

(2) Point out, clearly and succinctly, how he can’t pay for ANYTHING he’s promising. It’s not a Republican or Democrat thing… it’s simple, junior high math. I’ve call it a #WarOnMath. Even hardcore liberal journalists like SL’s Tom Moran have agreed on this point. Politicians who try to be all things to all people got us into the current mess. Murphy’s nonsense will push us over the cliff. Call it “a cruelly dishonest fantasy.” Seniors, kids, first responders will all lose out in particularly grand, awful fashion.

(3) He’s a public safety risk. Even President Obama and both Clintons advocated deporting illegal criminals. Murphy is charting radical, dangerous territory. Phil Murphy is MS-13’s dream candidate. Very, very anti-police. DEFEND the Sanctuary ad, and call out Murphy over the fake press release. “The biggest threat to legal, hard-working immigrants are the lawbreakers, like Jose Carranza, whom Phil Murphy will give the run of the state.” BTW – Why isn’t anyone talking about how Kim’s running mate, Carlos Rendo, is a Cuba immigrant?

(4) Double-down on her common sense audit pledge and weaponize it. Murphy’s running mate and CAREER POLITICIAN, Sheila Oliver, said there’s no waste in state government at Monday’s LG debate. Does he truly believe that? Yes or no.

(5) Call out Murphy for running a sexist campaign, e.g. the weak Christie tie-in ads. Talk about his own deep Weinstein ties and declare that it’s time to break up the Corzine-Christie-Murphy boys club. GO HARD AFTER THE GOVERNOR; make the break she should’ve made two years ago. “I worked with him when he was right; when he was wrong, like on the gas tax ballot question, I spoke out. Where was Phil? Siding with Christie on the gas tax.”