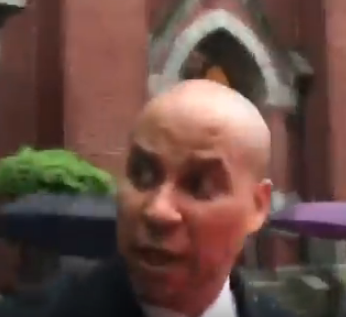 WASHINGTON, D.C. — The pre-presidential campaign transformation of Cory Booker (D-Twitter) is continuing to accelerate, Save Jerseyans.

Once a vocal proponent of populist power and even the venture capital system, Booker is jumping all over the ideological map ahead of the 2020 presidential nominating contest; he hopes to secure his party’s nomination over a sizable field of potential rivals, and to do so, he’ll need to talk a Bernie-esque game while simultaneously locking up establishment “superdelegate” support. Unlike the GOP, Democrats afford a great deal of power to designated superdelegates, leading many populist Democrats to call for reform.

New Jersey had 18 superdelegates in 2016; Booker was among them, and he endorsed Hillary Clinton.

An America Rising PAC tracker caught up with Booker in D.C. and asked “Do you support eliminating superdelegates ahead of the 2020 primaries?”

“I have a problem with the superdelegate process, but it’s a hard thing to change,” Booker replied.

Booker shut his car door before explaining why it’d be hard: