A lesson in manliness from Chicago Bears kicker Cody Parkey 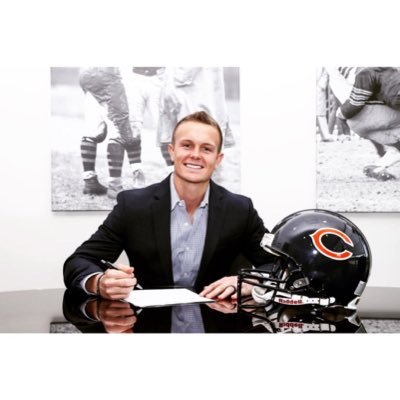 Chicago Bears kicker Cody Parkey was already having a rough year, and it just got a whole helluva lot worse on Sunday night.

In case you somehow missed it (I’m an Eagles fan, so missing any of it is inconceivable to me), Philadelphia narrowly scraped by Chicago in Sunday evening’s epic NFL wild card contested at Soldier Field (16-15) after Parkey missed a 43-yard, 3-point field goal attempt.

Bears fans were predictably merciless. Yes, they’re NFC North division champions for the first time in nearly a decade, but after so many years in the wilderness (or hibernation if you want to be cute about it), Codey will now rightly or wrongly serve as the focal point of a lot of pent up frustrations. Like I said: he hasn’t exactly been lighting it up this season. Back in November, he clanged the uprights FOUR TIMES in one game against the Lions.

Is he complaining about how the ball was probably tipped? Pointing fingers? Even as football fans from across the league mercilessly tease the guy on social media? And his own team’s fan base is ready to throw him into the Chicago River?

“You can’t make this up. I feel terrible. I let the team down. That’s on me. I have to own it. I have to be a man. Unfortunately, that’s the way it went today,” a stoic Parkey told ESPN after the game in the locker room…

Wow. When’s the last time you heard THAT, Save Jerseyans?

Even if you don’t follow the NFL religiously, I’m pretty certain even those living under rocks are aware of our culture’s ongoing, feminism-catalyzed and #MeToo driven debate about manhood generally, what it means to be a man, and whether promoting manliness is even a worthwhile endeavor. In New Jersey? And a handful of other states? The transgender movement is attempting to erase “man” from the cultural lexicon altogether by giving parents the option to go “gender-neutral” on birth certificates.

Ironically, these extremists blame most of the world’s ills on a caricature of manhood, one which — as much as I appreciate most of his policies and his willingness to throw punches — our incumbent president doesn’t always do a good job of combating. But that’s what this silly debate has done to our ailing culture. Rather than build up boys into adult men who are capable of being the sort of strong, respectful, capable partners womankind deserves? The next generation of male leaders are asked to neuter themselves, and reject their own biological nature, to avoid offending a small but vocal ideology pushing back against a caricature.

What does “being a man” really mean? Why is it so important?

Christian author Elisabeth Elliot opined in her book The Mark of a Man how “[t]he world cries for men who are strong; strong in conviction, strong to lead, to stand, to suffer.”

And it’s precisely HOW a man handles that suffering which defines not only himself but the convictions he champions. We remember Christ, Lincoln, MLK, and JFK for how they suffered as much as the causes for which they suffered and gave the last full measure of devotion (h/t Honest Abe).

Life hands you lemons under the best of circumstances. There are no safe spaces, re-tests, or crying closets in the real world where real men and real women work, fight, struggle, love, hate, succeed AND FAIL on a daily basis.

No, Cody Parkey’s situation isn’t as dire as the men referenced in the preceding paragraph. “It’s only football.” But his example of how to handle disappointment, anger, failure — all forms of suffering — in the midst of a major, important, emotionally-charged moment in his life SHOULD be an example to every young athlete out there in America growing up in an age where they would justifiably feel confused about what society expects of them.

This is what Parkey said himself back in November after his four-doink-in-one-game fiasco:

“Of course they’re frustrated with me, but who’s more frustrated than myself?’’ he said. “I mean, this is my job, this is what I’m supposed to do, and I’m missing out there. I’ve got just to trust in what I’m doing and trust that my Lord and Savior Jesus Christ makes no mistakes. For whatever reason, that was the day I was supposed to have.’’

You’re not defined by your failings. You’re not defined — and this is a biggie — by the obstacles or disadvantages which the culture shrilly insists should define you. You’re defined by the dignity and courage you show when facing down and getting through these significant junctures in your own life.

The best of us leave the world a little better, too, than we found it.

Some might say possessing these traits makes you a “hero.” A self-possessed individual. Living one’s “best life.” Whatever.

In a simpler time, we used to call that just being a man.