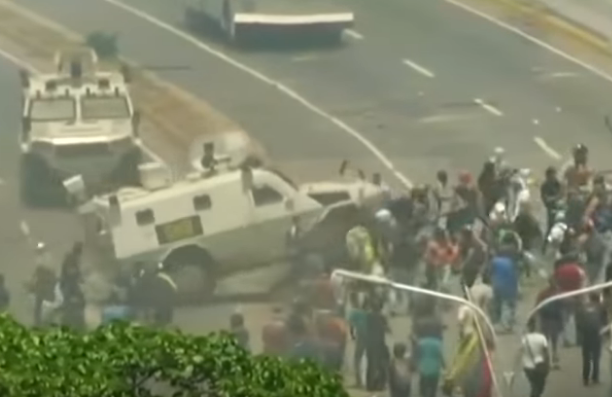 I need to get this one off of my chest, Save Jerseyans:

Leftists who pretend to be anti-gun aren’t really anti-gun. They’re anti-YOU and me owning guns. They want to live in a world where only the government owns guns (and gets to use them).

Even one MSNBC personality – yes, that MSNBC – might finally get it (h/t Free Beacon):

“MSNBC reporter Kerry Sanders unwittingly made the American case for the Second Amendment during a report Tuesday on the political upheaval in Venezuela.

Anchor Andrea Mitchell introduced Sanders for his report by commenting on the surprising ability of Venezuelan dictator Nicolás Maduro to stay in power, despite the pressure on him to step down.

“Not only hanging on but he appears to still control the military,” Sanders said. “You have to understand, in Venezuela gun ownership is not something that’s open to everybody. So if the military have the guns, they have the power and as long as Nicolás Maduro controls the military, he controls the country.”

Welcome to earth, Kerry. Thanks for joining us!

I suppose it speaks to the power of images. There might come a point where even some woke MSNBC “reporters” have difficulty ignoring viral videos of socialist stormtroopers mowing down protesters with military vehicles:

Our forefathers planned for all of this. Contrary to what you’re hearing on the Democrat clown primary circuit this spring, the Second Amendment isn’t a reflection of the American Framers’ concerns for hunting rights. There wasn’t an NRA boogeyman in the late 18th century. The founding generation might’ve enjoyed watching Duck Dynasty given the chance! But no, James Madison and company had much bigger fish to fry.

They knew – from first hand experience – what could happen when the government owns all of the fire power. The Second Amendment was intended to be the guarantor of the First Amendment (note the numerical ordering); paper ballots are mere scraps of paper if the will of the people has nothing to back it up in the event of a tyrant or mob intent upon seizing unconstitutional powers. Our entire system was DESIGNED, specifically, to protect against that eventuality, one which the Founders probably feared was inevitable. They were students of history after all.

So is it really gun control? Nah. Not really.

When you demand draconian new regulations or even domestic confiscation after heart-wrenching but statistically rare “mass” shootings? You’re ignoring Ben Franklin’s admonition that “[t]hose who would give up essential Liberty, to purchase a little temporary Safety, deserve neither Liberty nor Safety.”

Watch the stuff coming out of Caracas if you don’t believe me (or Ben, or Madison).