ROONEY: Bullet-resistant backpacks, school doors in Harrington Park are “all a Band-Aid” 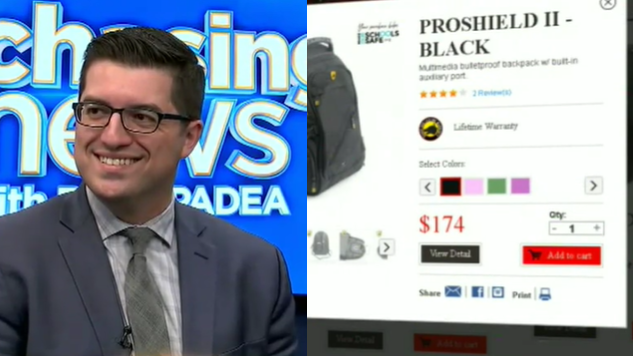 TRENTON, N.J. – Office Depot has reportedly pulled bullet-resistant backpacks off of its shelves during the back-to-school shopping crunch. Meanwhile, the Northern New Jersey community of Harrington Park is installing bullet-resistant doors (imported from Israel) at its local K-8 school.

Is the new bullet-resistant fad a logical step to aid school safety? Or an emotionally-manipulative strategy for companies to make a buck? Save Jersey Founder and Editor-in-Chief Matt Rooney was back on the Chasing News A+ Panel this week to weigh in just ahead of the Labor Day long holiday weekend.

“It is a little strange. And by all means, if it was an economic decision – people just aren’t buying them? – I get it. That’s fine. That’s how a free market system work. It’s a high price point. But if it was because of some kind of outcry, I would certainly think that’s a mistake,” Rooney responded to host Bill Spadea’s question about the sagacity of Office Depot then not-yet-explained decision to pull the backpacks. “If people want to buy something that makes them feel more safe, I don’t see where the harm is.”

Are guns the real problem?

“I mean by my friend Afia’s standard here it’s all a Band-Aid, because again, you have a better chance of being killed by lightning – thank God – then you do being killed in a school shooting,” Rooney added, responding to co-panlist Afia Yunus’s accusation that gun availability is the root problem which needs to be addressed.

Rooney has repeatedly argued that the threat of school shootings in not just wildly exaggerated, but that the best past forward is to empower schools (and teachers specifically) to intercept clearly disturbed students.