Wolfe retires from the N.J. Assembly 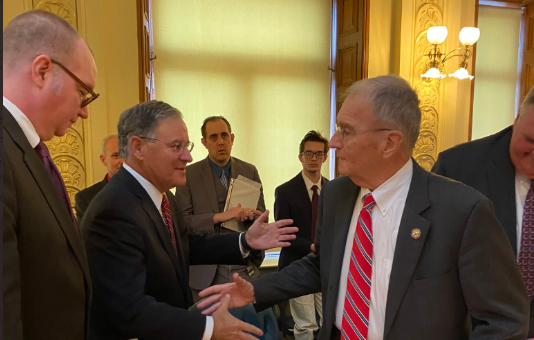 TRENTON, N.J. – Dave Wolfe took a bow today during the last voting session of the 2019-2020 legislative session. First elected to the chamber in 1991, the Ocean County Republican declined to seek reelection last November.

Wolfe – a professor at Ocean County College – served on Brick Township Council from 1976-1991 and as the local body’s Council President from 1987-1988 and again from 1980-1981. Assemblyman-elect John Catalano (also of Brick) will succeed Wolfe when the new legislature begins on January 14th.

Legislative colleagues paid their tributes at the State House and also on social media:

On our last day of the session, I want to take a moment to thank Assemblyman Dave Wolfe for all he has done for the residents of New Jersey over his 28-year-long career It has been a pleasure working with you over the years & during my first term in the Assembly Best of Luck! pic.twitter.com/DEqCNx218A