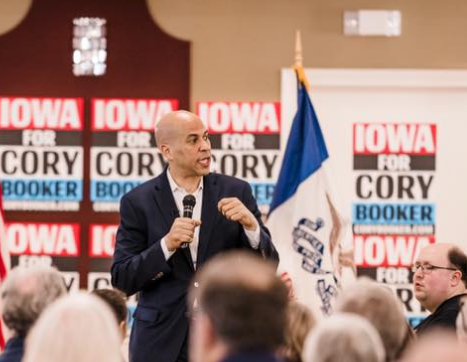 And so it begins, Save Jerseyans. After consistent basement-level polling and now missing out on a second debate stage, Spartacus (aka Gropacus, aka Cory Booker) is signaling an endgame to a failed presidential bid which never really got off of the ground.

“It’s going to be a challenging four weeks in the caucus for us,” Booker told The Associated Press “Ground Game” podcast this week, referring to news that a Senate impeachment trial is imminent. “If we can’t raise more money in this final stretch, we won’t be able to do the things that other campaigns with more money can do to show presence.”

“If our pathway to victory ever closes off, I’m not staying in,” Booker added.

Granted, this isn’t Booker’s first threat to quit (he pulled a similar-sounding stunt in the fall, declaring that he needed to raise $1.7 million or he’d need to quit), but with an RCP polling average under 3% in Iowa and no invitation to the upcoming Des Moines debate, it’s hard to see a viable pathway forward. His New Hampshire  polling is even worse.

No eventual nominee has lost Iowa and the Granite State since Bill Clinton in 1992.

The pending impeachment trial – and the attention it’s going to suck away from what should be the Democrats’ big opening 2020 act in Iowa – is simply a convenient excuse for Booker to finally bow out (barring a shocking top tier finish in Iowa). That’s what it’s sounding like anyway.

The groundwork is being laid to put this quixotic quest where it always belonged: in the dustbin.

Sit tight, T-Bone! You almost have your friend back.