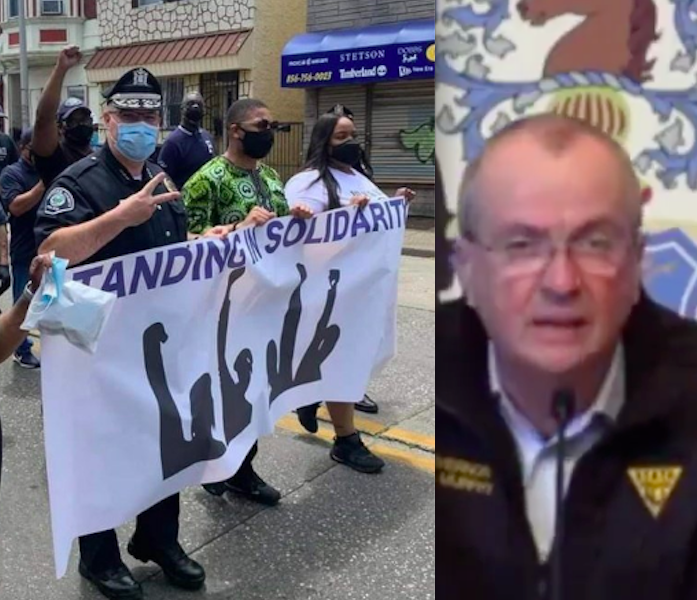 Governor Phil Murphy is America’s leading social distancing fanatic. He tweets about it. Drones on about it at his daily briefings. Even the electronic signs on our highways remind us that we’re “knuckleheads” if we don’t listen to him and stay both masked up and 6 feet apart at all times. Want to exercise your First Amendment right to protest the Governor? More than one New Jersey protester has already been charged with a criminal disorderly offense for the inexcusable “crime” of opposing Phil Murphy.

Then, half of a continent away from the Garden State, a previously obscure Minnesota man was killed by a police officer. Thousands of protesters and some rioters, too, took to the streets of New Jersey’s cities. Large groups of people standing close together (and in many cases without masks!) were suddenly everywhere in plain view. And yet miracuously, Save Jerseyans, our condescending lecturer-in-chief had… nothing to say about it.

His tone was actually that of an encourager-in-chief:

Yesterday in New Jersey, protestors marched side by side with law enforcement, in peaceful demonstration against systemic racism and police violence.

Let’s be clear about one thing. An important thing.

I could care less if protesters PEACEFULLY ASSEMBLE. In fact? I applaud it. I don’t have to agree with all of the rhetoric or specific policy proposals (whenever they can actually be found). That’s not the point. This is a free country for as long as we can keep it. Free speech is the lubricant of our American constitutional machinery.

I’m also not the one who made such normally lawful assemblies illegal.

“In Trenton, the subject who organized the protest from yesterday is pending charges not so much for the protest itself but for not having the social distance involved with being in a large gathering,” NJSP Superintendent Colonel Pat Callahan said a mid-April COVID-19 briefing, referring to one of the aforementioned anti-Murphy protesters.

At the moment? It’s illegal to gather with more than 24 other people outside in the Garden State. That limit applies to protests, yoga classes and backyard cookouts.

Phil and Pat criminalized public assembly, they claimed, because it was imperative to keep us safe. Some experts are now warning that these protests could help COVID-19 spread.

What I would now like to know: why is it okay to protest for George Floyd but not against Phil Murphy?

Will any protesters or organizers be charged for violating the stay-at-home order?

If not, will the citations issued to anti-Murphy protesters be dismissed?

Save Jersey’s Founder and Blogger-in-Chief, MATT ROONEY is a nationally-noted and respected New Jersey political commentator. When he’s not on-line, radio or television advocating for conservative reform and challenging N.J. power-brokers, Matt is a practicing attorney at the law firm of DeMichele & DeMichele in Haddon Heights (Camden County).
_