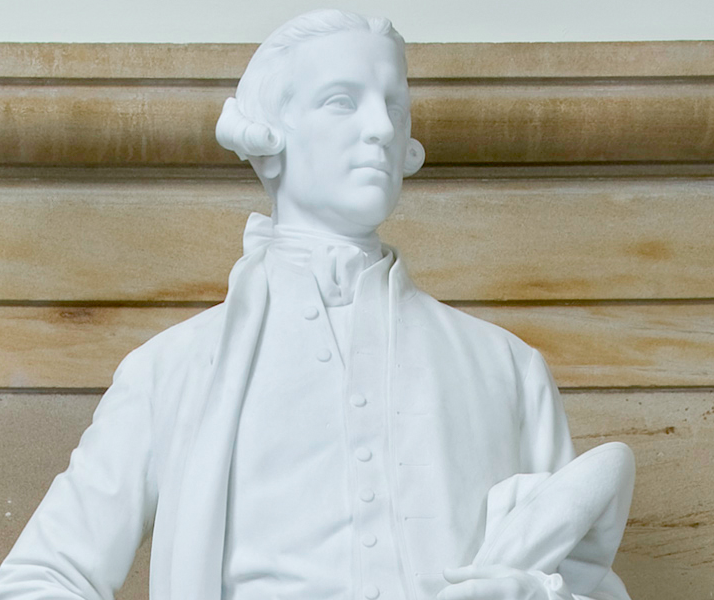 Our Independence Day Week project honoring each of New Jersey’s five signatories to the Declaration of Independence is just about wrapped up, Save Jerseyans. We’ve met Abraham Clark, John Hart, John Witherspoon, and Francis Hopkinson.

Last but not least is arguably the most famous (and controversial) New Jersey founding father: Richard Stockton.

Sadly, most Americans who’ve heard of this remarkable man probably recognize his name as attached to a highly-trafficked New Jersey Turnpike rest stop (what a legacy!). Stockton was back in the news in 2017 when the South Jersey university which bears his name removed his bust when Leftists resurrected allegations that Stockton owned slaves. We’ll revisit that claim a bit later.

Who was Richard Stockton?

He was actually a reluctant rebel, at least initially, who ultimately gave his life to the cause of the American Revolution. Born in 1730, Stockton initially had no interest whatsoever in politics let alone separation from Great Britain.

As the relationship between England and its North American colonies deteriorated, Stockton’s preferred remedy was gaining colonial representation in the British Parliament. The Stamp Act flap in the mid-1760s seemed to be the catalyst for his own revolutionary turn, but still wasn’t firebrand relative to his contemporaries like John Adams or Patrick Henry. In 1774, he wrote Lord Dartmouth (then Secretary of State for the Colonies) concering his supprot for “a plan of self-government for America, independent of Parliament, without renouncing allegiance to the Crown.”

He even visited Great Britain between 1766 and 1767 and address King George III who, it was reported, approved of the increasingly prominent America’s comments concerning the repealed Stamp Act.

Stockton remained on the sidelines notwithstanding his evolving political views. An attorney, he didn’t enter government until his return from Great Britain; in 1768, he accepted appointment to the governing Council of New Jersey. He later joined the New Jersey Supreme Court in 1774.

Then events accelerated. Appointed to the Continental Congress meeting in Philadelphia, Stockton signed the Declaration of Independence on July 2, 1776. He was the first of the five New Jerseyans in the delegation to sign. Stockton would pay dearly for it.

On November 30, 1776, Stockton was waylayed by loyalists after returning to New Jersey to move his family to safety away from the anticipated path of the British Army. His captors turned him over the British in Perth Amboy and Stockton’s long odyssey began. General Cornwallis occupied Stockton’s Princeton home; his possessions were confiscated by the British Army as confirmed in a letter written by his son-in-law Dr. Benjamin Rush, a fellow signer of the Declaration of Independence. The Continental Congress subsequently directed George Washington – a close personal friend of Stockton – to ascertain Stockton’s status. Starved and frozen, Stockton was released not long thereafter on January 13, 1777.

More Revoluntary War American combatants died in British custody than on the battlefied. An invalid due to his injuries who never fully recovered from his time in captivity, Stockton died in Princeton on February 28, 1781. A late in life lip cancer further compounded the detiortion of his health.

Stockton’s release from prison remains controverisal. He was accused by some detractors of recanting his Revolutionary allegiances to win his own release. Notably, however, not a single shred of dispositive hard evidence exists verifying the allegations.

His life on the homefront is currently a hotter topic among some historians. Stockton University started a project to study its namesake’s connection to slavery and the aftermath of his imprisonment:

“In Stockton’s case, enslaved people worked in his family home—a property he called Morven—built after he inherited near Princeton, New Jersey in the 1750s. When he died in 1781, and despite assertions during his lifetime, Stockton did not free the people that he owned. They appear in his will, when he bequeathed them, along with his other ‘property,’ to his wife Annis Stockton: ‘And whereas I have heretofore mentioned to some of my negroe slaves, that upon condition of their good behavior & fidelity, I would in some convenient period grant them their freedom—this I must leave to the discretion of my wife, in whose judgment & prudence I can fully confide.’”

The slavery hypocrisy doesn’t make Stockton unique among a generation of men who, including his friend Washington and Thomas Jefferson, established higher ideals than they were able to attain in their own lifetimes. It is indisputable that the ideas of Stockton and his contemporaries inspired and continue to inspire those seeking freedom all around the world, and the “more perfect union” to which our country continues to aspire wouldn’t be possible were it not for the sacrifices of Richard Stockton and the other signatories to the Declaration of Independence.

Stockton is buried at the Stony Brook Meeting House in Princeton. In 1888, New Jersey submitted a marble statue of Richard Stockton to the fampous National Statuary Hall Collection on display at the U.S. Capitol. in Washington, D.C.