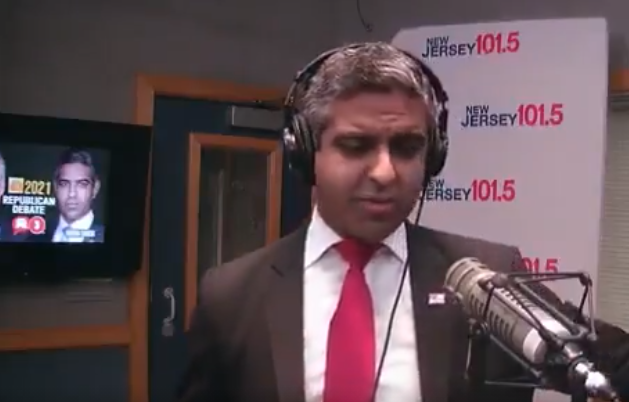 Hirsh Singh has another loss under his belt, Save Jerseyans, and this one might prove the most bitter.

Call it an upset (of sorts) if you want.

A sizable six-figure self-loan bought Singh an NJ 101.5 debate with Jack Ciattarelli and a decent amount of mailers to the GOP voter universe. More Singh apparently wasn’t a good thing in the eyes of moveable voters; Rizzo – who missed qualifying for matching funds – succeeded in placing second on the strength of an aggressive social media campaign, grassroots organizing, and the support of NJ 101.5 morning host Bill Spadea.

Singh also had name recognition from multiple prior runs since 2017 despite only being 36-years-old. Singh lost his 2017 gubernatorial primary campaign, a 2018 NJ-02 House campaign (despite being the party-endorsed candidate), a 2020 U.S. Senate race (which he challenged in court and never conceded), and now the 2021 race .

#1- Most NJGOP voters wanted more than MAGA. Trump is still fairly popular with the NJGOP base as a whole no dbout, but the base also wants to beat Phil Murphy and was turned off by Singh’s obsessive one-issue refrain that he’s ready to be the New Jersey Trump. Trump isn’t popular in the Garden State as a whole, losing here in 2020 by only a slightly-less terrible margin than Mitt Romney did in 2012. Republican voters don’t want someone who apologizes for the Trump tenure, but they also wanted to hear MORE than a generic MAGA message and Singh’s campaign never went through that evolution. They made more pragamtic choices (Ciattarelli or Rizzo) because they really hate Murphy and want to win this one. One-dimensional protest candidates do better when the stakes are less high or the general election opponent is less reviled.

#2- He simply pissed too many people off going back to 2017. Multiple campaigns going back to 2017 and a history of questionable tactics – from encouraging people to request duplicate ballots to, most recently, his advisor going after Ciattarelli’s wife with a video camera ambush – jaded a lot of establishment AND anti-establishment voices who might’ve otherwise flirted with backing Singh. In actuality, many former Singh backers looked elsewhere this time around. There’s no proof it came from Singh or his campaign, but a fake last minute Trump endorsement probably did more harm than good (see point #1).

#3- Rizzo benefited from lack of over-exposure. The Ciattarelli campaign did a masterful job of beating up Singh over the past several weeks, invoking past missteps including his criticism of police and praise of Barack Obama. General Consultant Chris Russell can drive up an opponent’s negatives better than anyone else on the GOP side in Jersey. While Rizzo wasn’t as present in anyone’s mailbox or Facebook feed as the other two major candidates, it may’ve helped him beat Singh in the end. I can’t tell you how many voters – who had ruled our Jack for one reason or another – told me in the final days that they were going for Rizzo over Hirsh because of one or another things they’d heard/read/discerned about Singh.

#4- Republicans ultimately want a winner who “gets it.” What’s it? Hirsh is a multi-campaign loser at this point who doesn’t own a business or pay property taxes. That isn’t a put-down, folks; it’s just a statement of fact. How can you take on Phil Murphy, his property tax hellscape, and his business-killing record if you can’t personally relate to any of it? Again, I heard some version of this gripe from multiple voters in my orbit who weren’t voting for Jack.

So is this the last we’ve heard of Hirsh?

We’ll see. He doesn’t have a history of losing well, and unlike the last decade’s leading NJGOP perennial candidate Steve Lonegan (who was a successful small businessman on the side), Hirsh doesn’t have must else going on aside from these repeat runs.

My unsolicited advice would be to take the hint, take a break, take some time to build a successful resume OUTSIDE of politics (he’s obviously not a dumb guy), and then maybe reengage the effort in a productive way. Perhaps enough time and admirable behavior could lead to a run for local office down the road? His home county of Atlantic is a battleground that always needs aggressive candidates. But the current shtick was wearing on people.