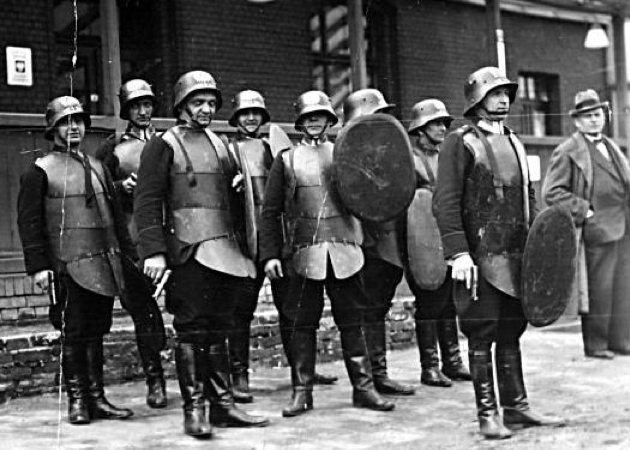 How many arrests and “violent clashes” can you remember seeing or hearing about at tea party rallies?

Didn’t think so. I haven’t either. And that’s because the tea partiers, almost without exception, are intelligent, articulate American citizens with a substantive agenda. They can communicate effectively and, as a result, they don’t feel the need to express emotions in a physical manner.

The Occupiers aren’t as articulate, Save Jerseyans.

Their movement also lacks substance. Unfortunately, the inability to (1) communicate substantively and (2) communicate effectively inevitably produces additional frustrations among an already-agitated mob. The end result is VIOLENCE. It’s the only recourse of an overwhelmed and underwhelming mind!

Hence, I wasn’t surprised to hear from CBS News’s New York station this morning, reporting that the protesters had confronts New York City police officers with scuffles ensuing in the streets. This latest skirmish comes after 23 arrests occured on Wednesday near Wall Street and over by State and Bridge streets.

Remember that ALL of this was predicted right here at Save Jersey by your glorious Blogger-in-Chief. I warned you that this movement wasn’t anything novel or groundbreaking; that its ultimate aim was old school, far-left “redistributivist government implemented through Alinky-style tactics instead of democratically-cast ballots.”

The name “Alinsky” is employed deliberately. In the opening of his infamous Rules for Radicals (a.k.a. President Obama’s bedside bible), Saul Alinky unflinchingly embraced occupy-style violence: “The Revolutionary force today.. are reminiscent of the idealistic early Christians, yet they also urge violence and cry, ‘Burn the system down!’ They have no illusions about the system, but plenty of illusions about the way to change our world. It is to this point that I have written this book.”

And wouldn’t the late Mr. Alinsky be proud of this latest batch of radicals? As well as the President who empathizes with their empty demands and bad behavior?

Make no mistake about it: these occupiers want to burn our American system to the ground… unless, of course, the NYPD’s rubber bullets stop them first. Violence has always been a part of the blueprint for a transformed United States.

So I say ‘aim true, men in blue,’ with your clubs and tear gas canisters the next time one of these idiots tries to attack you or defecate on your squad cars. No sane American will hold it against you.