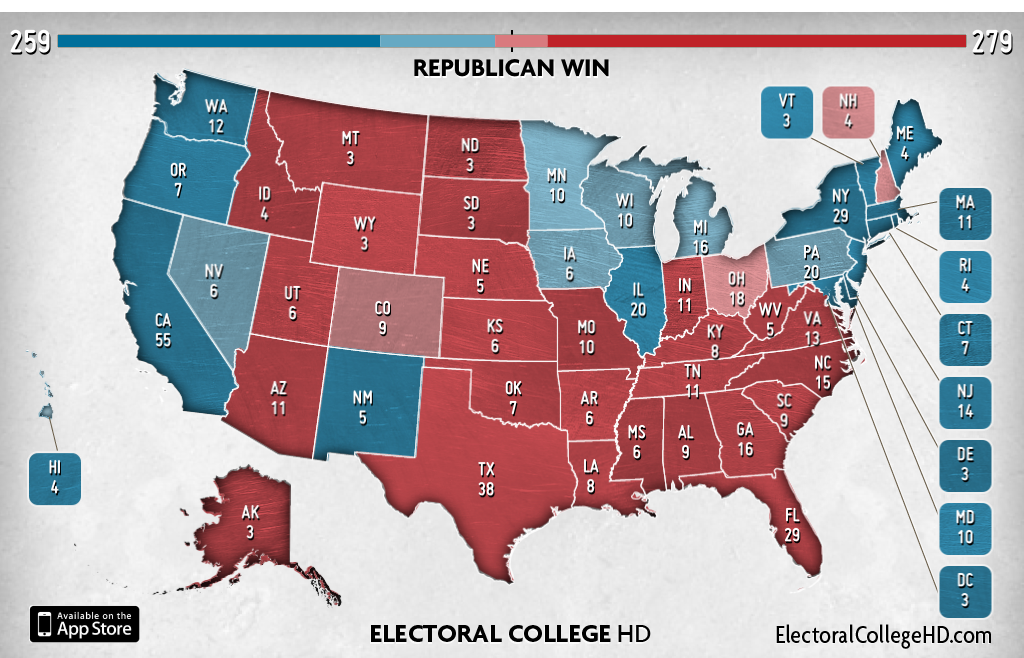 The big day has finally come. After over a year of campaigning, billions spent, and tensions running high on both sides of the aisle, Election Day 2012 is but a mere sunrise away. No matter what happens tomorrow, I think the fact that this chapter in America’s story can finally come to a close is worth appreciating.

Of course, even with that soothing though in mind, we are all still going insane wanting to know how it ends. Well, here is my final prediction with no toss up states (click to enlarge) which you’ll note is materially different from Matt Rooney’s Save Jersey map: 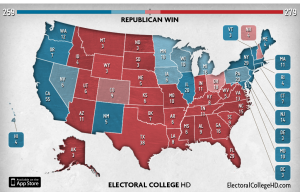 Final count for my map is 279 for Romney, 259 for President Obama. A clear and decisive victory for the challenger, and of course for the American taxpayer.

To come to these conclusions, I looked at the latest polls of good repute, the evolving narratives in the news, and the general feeling on the ground.

These states could really go either way, but in the interest of finality, I have decided to make an executive decision on each state. This is how it broke down…

(1) Ohio will likely go for Romney. While the polling is a dead heat, the trend has been toward Romney for the past month. Expect undecideds to break for Romney and expect the all important coal industry part of southern Ohio to come out big for Mitt, even among union voters. Romney had an unprecedented turnout at a Cleveland event over the weekend, for what it is worth.

(2) Pennsylvania will likely go Obama. PA is a strange state. It elects people like Tom Corbett and Pat Toomey, but will likely reject Tom Smith and Mitt Romney, but not by much. The Obama machine has worked hard to turn people out in Philadelphia. Essentially if Romney does not cut margins in the city and the surrounding suburbs (assuming that he cannot win the suburbs, he did just bring out 35,000 people in Bucks County last night) then he will not win the state no matter what happens in the famous “Pennsylvania T.” I worked the polls in North Philadelphia back in 2008. Despite my best efforts as a poll challenger in a very nasty part of the city, there was a ton of fraud and manipulation going on right before my eyes, and they ignored the lawyers we sent in to stop it. Here’s to hoping that will not hold Mitt back, but I am not holding my breath.

(3) New Hampshire should go for Romney. Polls are tied or within the margin on both sides. New Hampshire recently sent its entire state legislature to the GOP by a wide margin. It is a state that loves challengers and to go its own way. Romney is considered a home town candidate there, where he has a vacation home.

(4) Nevada will likely go for Obama once again. The state has a high hispanic population that has bought into the idea that Obama is somehow better for them and their families. Whether that is true or not… well, hopefully we will never find out when Obama gets fired tomorrow.

(5) Colorado will likely go for Romney. Similar to Ohio, the polls have been trending in his favor for about a month.

(6) Iowa will likely go for Obama. This state has been on a downward path ever since they launched President Obama’s White House bid back in the 2007 primary. While it is close, I do not see it changing for the better in 2012.

(7) Wisconsin will likely go for Obama. While the state elected Governor Scott Walker twice in two years and Paul Ryan is among its citizens, Obama will hold on. However, expect the Obama margin to be razor thin, much like Pennsylvania. As a qualifier, if any states stray from my map, I expect this to be the one.

(8) Michigan will likely go for Obama. I mean, come on. It’s Michigan. I know what the polls say, but I simply do not buy it.

(9) Minnesota will most likely go for Obama. I know what you are thinking. This state should be a lock for the Democrats as it has been for a long time. But not so fast. There is a gay marriage initiative on the ballot this year, much like there was in the all important Ohio in 2004. This type of ballot question brings out the religious right and also gets the African American community, however small it may be in Minnesota, crossing party lines. Obama is still likely to win the state, but do not be surprised if it is within a few points rather than double digits.

So there you have it Save Jerseyans, my final map. Agree or disagree, we will all find out tomorrow. Go vote!