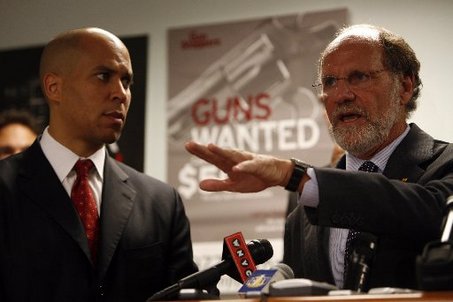 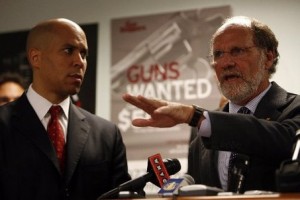 According to Yahoo! News, Cory Booker is “America’s favorite mayor.”

Ouch!  I certainly beg to differ, folks (and apparently so would a lot of angry folks in Newark if last night’s council meeting incident is any indication).

I mean, he has certainly risen to star status in the recent past but hey, it’s easy to be adored when you don’t have to be the face of unpopular decisions and contentious battles on legislation.  It’s also easy to be worshipped when you represent like-minded people.  You just can’t go wrong.  And since “the majority of Americans” are similarly like-minded, of course, he is held in high regard across the country.

Heck, if I played for the other team, I’d be crushing on him, too.

And Booker’s faithful followers (again… mostly outside of Newark and New Jersey generally) will no doubt love him even more after he lives for a week or more on food stamps to prove out that the government needs to provide additional sustenance for school-aged kids.

This all came out of a twitt-versation between Booker and Twitter follower @MWadeNC around a disagreement over government funding of food programs for school children.  Booker believes that the government is responsible for making certain that kids to go school fully nourished and ready to tackle the day.  @MWadeNC disagrees and tweeted that “nutrition is not responsibility of the gov’t,” leading Booker to present a challenge to his opponent – that both will live on food stamps for a week or more to demonstrate that kids need more nutrition than what they can currently get with food stamps.

Nutrition for low-income families is already being handled by the government with the food stamp programs currently in place (a record 42.2 million will rely on them this Thanksgiving), and parents also have the ability to use their food stamp cards to purchase healthy alternatives from farmers’ markets for their families.  Exactly how much more intervention is necessary?  Ah, big government, where does it end?