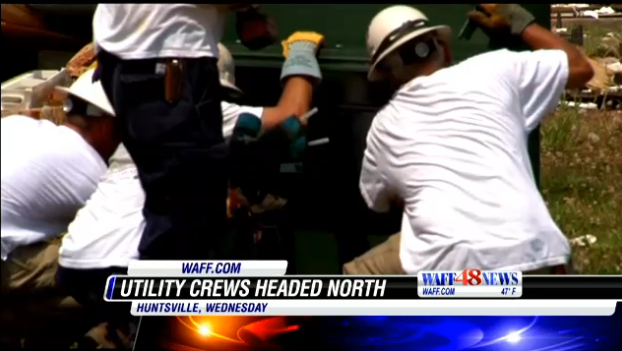 UPDATE #3: The Alabama-based company at the center of this controversy released its own version of events earlier this afternoon…

Decatur Utilities sent a 6-man crew to the Northeast Wednesday October 31st, bound for Seaside Heights, NJ to assist with power restoration. Communications with Seaside Heights was poor due to lack of cell phone service in the area.  Upon arriving at a staging area near Virginia, crews were held in place pending clarification of documents received from IBEW that implied a requirement of our employees to agree to union affiliation while working in the New York and New Jersey areas.  It was and remains our understanding that agreeing to those requirements was a condition of being allowed to work in those areas.  As we waited for clarification, we became aware that Seaside Heights had received the assistance they needed from other sources.  To be clear, at no time were our crews “turned away” from the utility in Seaside Heights.

In connection with state and regional public power associations, Decatur Utilities attempted to contact other areas that needed assistance.  However, based on the uncertainty of union requirements that we could not agree to and the uncertainty of whether a resolution could be reached, we ultimately made the decision to return them to Decatur after being stalled in Virginia are most of the day on Thursday.

Our state is in the midst of recovering from perhaps the worst natural disaster in our history. It is outrageous and unthinkable that crews coming to aid the recovery efforts were told ‘Thanks but no thanks’ for their help because they were not unionized,” said Senator Joe Kyrillos.

“Our state desperately needs the help other states are willing to provide. Turning a crew away because they are not unionized is absolutely unacceptable. I implore the Governor and our Emergency Management Teams to get to the bottom of this incident and ensure this does not happen again. No willing crews-regardless of their union status– should be turned away during this time of great need across our state. If any crews want to come help in my district, I will certainly make sure they are put to work helping our residents in need.”

Update #1, 1:15 PM: from Fox News; this is what one Alabama crew is apparently alleging…

Officials from the International Brotherhood of Electrical Workers presented Alabama-based Decatur Utilities with documents that “required our folks to affiliate with the union,” Ray Hardin, general manager of Decatur, told FOX Business on Friday. “That was something that we could not agree to. It was our understanding and still is that it was a requirement for us to work in that area.”

Hardin said most of his six-man, four-vehicle crew was stuck in Virginia on Thursday instead of helping the N.J. shore town of Seaside Heights recover due to the bureaucratic tie-up. Eventually his crew ended up heading back home to Alabama because of the disagreement.

“We chose we could not agree to those documents and began looking for other areas that could use our assistance without those conditions,” Hardin said.

A spokesman from the IBEW said the union is “checking out the source of the story and trying to ascertain the facts.”

Ugh…I’m still hoping this is a mix up and not deliberate. NJ.com spoke to power companies a short time ago who’ve said that non-union workers ARE welcome…

Original Post 8:58 AM: If this report is true, Save Jerseyans, then someone in the Administration needs to act. NOW.

It’s an embarrassment for our state if volunteer American utility workers from other states were really turned away after a distress call from Seaside Heights because they’re non-union employees. For what it’s worth, AFP-NJ made a good related point in a Thursday press release… do we really want to bail these unions out with Ballot Question #1 (something I’ve railed against) when we need the money to rebuild our coastline? Especially after learning this?

I’m so disgusted that I can barely type, Save Jerseyans…

h/t WAFF-TV in Huntsville, Alabama (where there’s a “right to work” law):