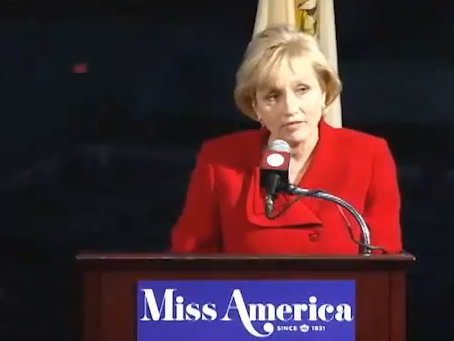 The Miss America Pageant was concocted decades ago by the Businessmen’s League of Atlantic City as a way to keep tourists at the resort after Labor Day. Then it controversially left town in 2006 right as the convergence of Jon Corzine’s ruinous stewardship and a national economic downturn laid waste to New Jersey’s formally robust economy.

That’s why the Christie Administration represented by Lieutenant Governor Kim Guadagno was so enthused to formally welcome the pageant back to Atlantic City’s Boardwalk Hall on Thursday afternoon:

You can’t help but appreciate the symbolism…

It was only a few short months ago that we all watched Hurricane Sandy wash away large chunks of the A.C. Boardwalk, Save Jerseyans. Challenges and questions remain and will continue to linger long after the official clean up is over. Corruption and mismanagement are just as much a problem now as they were when Nucky Johnson still strode the boards.

But today at Boardwalk Hall, those who are invested in the Shoreline economy are hoping Miss America’s return represents a turning point after decades of decline. You can’t blame them… odds be damned. This is a gambling town! It’s been a long haul and it ain’t over yet.