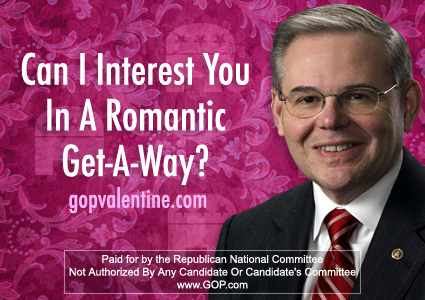 Serious questions may remain concerning the parameters of Sen. Bob Menendez’s relationship with a Florida donor, Save Jerseyans, but it looks as if the prostitution allegations levied against him are coming up short. Or are they?

According to The Washington Post, “[a]n escort who appeared on a video claiming that Sen. Robert Menendez (D-N.J.) paid her for sex has told Dominican authorities that she was instead paid to make up the claims and has never met or seen the senator, according to court documents and two people briefed on her claim.”

The woman said a local lawyer had approached her and a fellow escort and asked them to help frame Menendez and a top donor, Salomon Melgen, according to affidavits obtained by The Washington Post.

That lawyer has in turn identified a second Dominican lawyer who he said gave the woman a script and paid her to read the claims aloud. The first lawyer said he found out only later that the remarks would be videotaped and used against Menendez, the affidavits say.

Click here to read the full WashPo report. Maybe it’s Wolf Blitzer’s turn to look like a genius? There’s a first time for everything.

The Daily Caller, however, is sticking by its original story and says the WashPo story is a case of mistaken identity, stating that “[w]hile the Post said it had an affidavit from a woman in the Dominican Republic admitting she fabricated claims Menendez paid her for sex, that woman was not one of the two prostitutes TheDC interviewed for a Nov. 1 report.”

The Washington Post falsely reported a story yesterday claiming our source had recanted her statement, without contacting The Daily Caller for comment before posting. In reality, the prostitute in the Post’s story does not appear to be one of the women we interviewed in 2012. Details provided by the prostitute identified as Ms. Santana in the Post story conflict with the taped interviews The Daily Caller posted on November 1, including the mention of a person whose name would not come to light for months afterward. In addition, Melanio Figueroa, the attorney for TheDC’s sources, has said the Post’s allegations are fabricated and that the affidavit is false. The Post would not provide TheDC with a copy of the affidavit, despite our request. We stand by our reporting.”

Regular readers know I’ve hoped all along that this part of the story isn’t true; nothing is more heinous than preying on young women and/or children (depending which allegation we’re talking about… there’s been many over the past couple months).

All the same, even if these particular allegations prove to be fabricated, here’s hoping the interested media doesn’t stop investigating the other more substantial allegations related to this story.