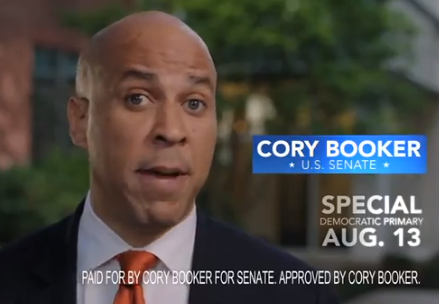 Cory Booker is more full of crap than anyone I’ve ever seen. Ever. And I know some world class BS artists in my time, Save Jerseyans. He has that unique ability to say absolutely nothing in such a way that your average person who’s half pay attention (or possesses only half of a brain) walks away believing they’ve heard something profound. In reality, the listener merely experienced a strong gust of expertly-aimed hot air! But they’ve already pulled the lever before they realized what happened.

Check out his first big U.S. Senate ad (out today) and tell me I’m wrong:

Running at problems? Kind of like how he flip-flopped on Obama’s venture capital attack ads last summer? Am I the only one who remembers this? He was running from the Obama cartel and himself on that one, folks. Quite a feat! I never knew it was physically possible. And when he’s not tweeting inspirational quotes or allowing him to be bullied by the White House, Mayor Booker constantly running away from Newark to destinations elsewhere. He also spent months running for Frank Lautenberg’s seat (while the poor guy was still very much alive) all while violence continued to rage on the Brick City’s streets.

At this point, the man probably has enough banked frequent flyer miles to purchase a round-trip flight with one of those private space vacation companies. Booker’s done such a poor job of confronting his city’s problems when he’s actually in his city that even the reliably liberal New York Times has called him out on it. Repeatedly!

If being an empty suit was an Olympic sport, then Cory Booker would’ve smashed Michael Phelps’s medal count a long time ago…

So please don’t buy into his act this fall, my dear Save Jerseyans, and don’t let your friends/family/neighbors fall for it either. Cory Booker expertly avoids problems; as a result, New Jersey’s most popular Democrat is going to spend the next four months running from his own record. Let’s do our best to make sure that record keeps pace with him. We owe it to New Jersey.

19 thoughts on “Booker Running from Himself”