Too Many Empty Suits 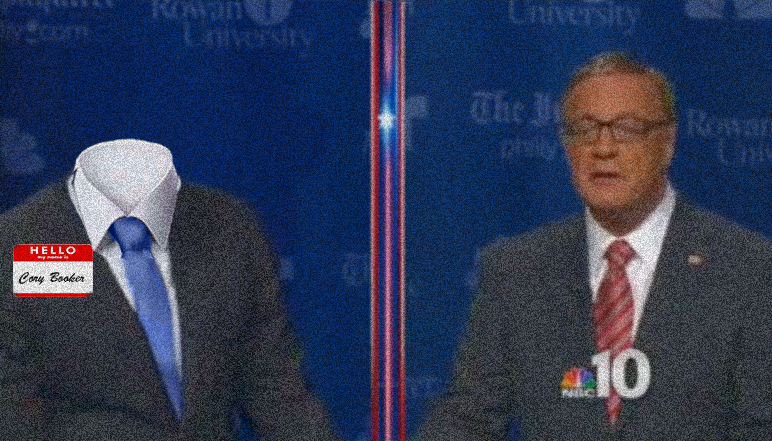 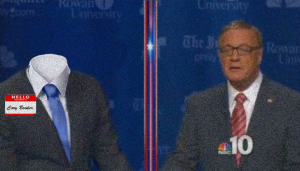 If you watched last night’s final #njsen debate, Save Jerseyans, then you heard Cory Booker (D-Twitter) use the word “tea party” more often than his opponent’s name.

Booker is a lot of things but “stupid” isn’t one of them. He came to play this time after flubbing the first debate. and reading plenty of polls which suggest that both the Tea Party and the ongoing federal shutdown are losers for Steve Lonegan. His buddy (and occasional bully) Barack Obama shared a similar experience in 2012. Plenty of smart people think Booker carried the day (and probably the election along with it). And they might be right.

What stuck in my crawl was Booker’s dogged insistence that people like Steve Lonegan are the problem in Washington.

Now, that’s not to say that I’ve always been a big fan of Steve Lonegan’s style. Far from it in fact…

Long-time Save Jersey readers know the history. I first interviewed Mayor Lonegan back in December 2008 and expressed my long-time admiration for his role as a conservative leader in New Jersey when there frankly wasn’t much of a Republican Party at all. He filled a void. I nevertheless grew increasingly critical of Steve Lonegan as the 2009 primary campaign progressed when he repeatedly violated Reagan’s 11th Commandment and got unnecessarily personal in his attacks on then-primary opponent Chris Christie.

I’ve always believed that unapologetic but happy conservative warriors won elections. Steve never smiled and it bugged the hell out of me.

But I’m not voting on October 16th to pick a new drinking buddy, am I? Neither are you. Presumably, we’re looking for a candidate who (1) shares our principles and (2) can do the job. An individual of substance.

Steve Lonegan is certainly that. He overcame legal blindness to build two job-creating businesses, successfully governed a Democrat town as a conservative Republican for three terms and has since proved himself to be a force in the arena of our state’s public discourse. You may not always agree with him. You may not even like him. You cannot, however, deny that he’s a three-dimensional human being with core convictions.

Cory Booker is anything but. He’s been running from his abysmal mayoral record from Day #1. I can’t blame him for that. It’s atrocious. Gross incompetence unchecked and enabled by a media culture that prizes celebrity over accountability. He’s never run a successful business (#waywire sure doesn’t qualify), never raised a family and certainly never mastered anything of note other than his Twitter handle. He’s an empty suit, folks, who changes his positions under pressure or for mere political expedience.

We promoted another empty suit named Barack H. Obama in 2008.

Similarly, other than getting elected to visible public offices, the Chicagoan senator hadn’t accomplished much more than Mr. Booker in a public career that was as uninspiring as it was short. The results should’ve been predictable. Like the Mayor of Newark, President Obama loves to use soaring rhetoric, platitudinal phraseology and the word “bipartisan” in virtually every address yet seems woefully incapable of leading as his predecessors from both parties had done in past shutdowns, similar political impasses and international conflagrations. I don’t need to reiterate the many failures of the Obama years in this post; suffice it to say, without the failed ObamaCare law on the books, there’d be nothing but scandal and division to remember this Administration come January 2017.

The men who built this great country were scientists, jurists, inventors, businessmen, poets, farmers, linguists and diplomats, Save Jerseyans.

Our nation’s halls of power are presently populated by career non-profit alumni, crusty labor union bosses, hyper-ideological community organizers and assorted other suspect individuals who wouldn’t know how to turn a profit at a lemonade stand let alone tackle a multi-trillion dollar deficit with our money.

So are substantive albeit abrasive politicians like Steve Lonegan truly the problem vexing our republic? One of the most abrasive men in American history – John Adams – is a large part of the reason why Cory Booker and Steve Lonegan are running for a senate seat and not a parliamentary one.

Or, as I strongly believe, do we really have too many empty suits like Cory Booker running the show?

Think long and hard on it. Then vote accordingly next Wednesday. Polls be damned; there’s too much at stake to sit this one out.

75 thoughts on “Too Many Empty Suits”