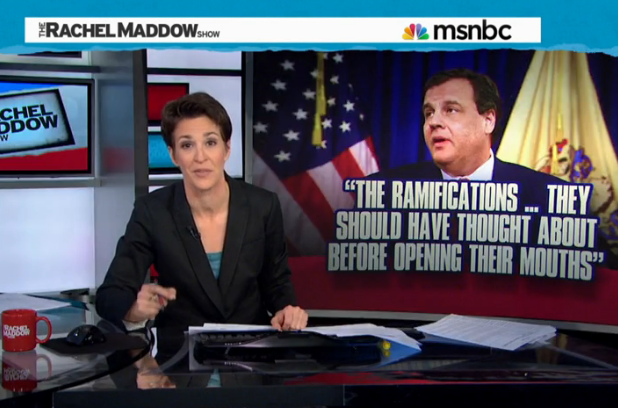 I loathe Rachel Maddow’s worldview, Save Jerseyans, but she’s good at what she does. Much like Alex Jones on the polar opposite end of the ideological spectrum, she’s capable of putting together seemingly obvious or mundane tidbits crusted around the peripheries of stories and presenting it to her audience in a way that doesn’t sound completely crazy.

Maddow’s theory has some holes. You’ve probably caught most of them. For starters, how does punishing one town in LD37 make Steve Sweeney (who is orchestrating the whole strategy to block Christie’s judicial appointments) suddenly feel affected?

Ultimately, my friends, the biggest problem with Maddow’s approach isn’t the substance so much as her aim — uncovering the “motive” — because the precise motive is somewhat past the point at this juncture.

So long as it was a political motive and not a legitimate traffic study then, frankly, the exact targets don’t matter for the purposes of cleaning house. The bigger issue is “who” was directing the targeting.

But that’s the problem with 24/7 television… they need something to talk about until more real evidence surfaces. That could take weeks! And her audience wants red meat. Now. So let’s trot out New Jersey Democrats’ favorite feisty grandma and drum up some sympathy. Why not. MSNBC isn’t above it and neither are the few thousand people who watch it.

I wonder what Ms. Maddow thinks of my theory?

23 thoughts on “Maddow’s “Get Weinberg” Theory”