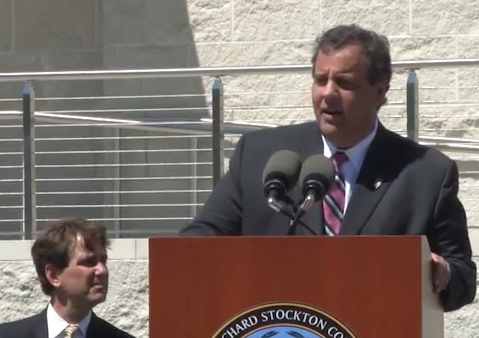 Sorry, Save Jerseyans, but this one is a little extra hard to swallow because I told you what would happen. And here we are in record time.

Do you remember Election 2012’s Ballot Question #1? Euphemistically designated the “Building Our Future Bond Act” and backed by both Governor Chris Christie and the Big Labor bought-and-sold Trenton Democrats?

I told you back then how, if passed, it would produce better than $1 billion in new public debt for the not-so-secret purpose of stimulating New Jersey’s politically-influential building trades unions. What do you and I get out of it? Debt inevitably leads to higher taxes and worse bond ratings, rendering any pretense of helping the state’s higher education profile completely unbelievable.

The plan was self-evidently counterproductive, and now it’s going to bite us right on the rump.

That which ails us was on full display this Thursday in Atlantic County.

“There’s 176 different projects that will be happening across this state at 46 of our different colleges and universities and the 750 million dollars from the Building Our Future Bond Act is just part of it as President Saatkamp notes there’s another 500 million dollars from other bond issues that we’re consolidating with that one, we’ll be investing just from the state’s end, over 1.2 billion dollars in our state colleges and universities over the next number of years,” Governor Christie declared on Thursday at the the Richard Stockton College of New Jersey’s Unified Science Center Parking.

“That’s a significant investment and Carl pointed out very appropriately, it will help to stabilize tuition and fees for the families who are paying them in this state because without the state’s contribution to capital funds, the universities and colleges would have to make those decisions to expand and grow and find the resources to do that and much of the money that would come for that would either come from the type of really naked philanthropic pitch that President Saatkamp made here on the naming of the building.”

Am I listening to Christopher J. Christie? The man who ran against government-by-borrowing in 2009?

I’ll always admittedly have a soft spot for the man among other reasons due to the fact that he at least tried in the beginning of his time in office to right this ship after a decade of mismanagement and corruption, and I won’t apologize for it. But now the Governor (and a large percentage of the Trenton GOP caucus) have gone seriously astray on this point and a few others. 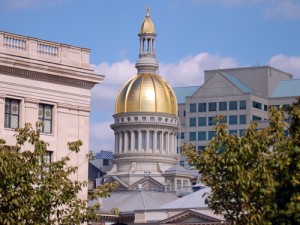 Look at the list of projects. I’m sure a few of them aren’t the worst waste of money that Trenton’s ever perpetrated (not saying much, I know), but we’re also going into serious debt to replace windows and rebuild websites, and contrary to what the Governor suggested in his remarks quoted above, all available empirical evidence proves that increasing higher educational subsidies actually correlated to increases in the cost of college attendance.

If someone can explain to me how a state with more debt, higher taxes to pay for the debt, and even more burdensome tuition rates is somehow more attractive to investors and taxpayers then go ahead, please do so at any time! I’m not buying it; I have ears to hear and eyes to see.

But oh, it gets even better ’cause in this state, all monstrously bad decisions are interrelated.

The $750 million bond act is a so-called general obligation bond. In case you live under a rock and missed it, thanks to our Trenton leaders’ lack of leadership, the state’s general obligation bonds were recently placed on a credit watch for a potential ratings downgrade. What does that mean? In laymen’s terms? Well, for starters, a rise in interest rates WILL devalue preexisting bonds and higher rates for future ones. In other words, the debt that our state continually accrues to pay off union political bosses will get more expensive, leading to more calls for stimulus packages to pay off the same union political bosses and the cycle continues onward forever without end….

Our wildly-popular pension “death spiral” post is chapter #1 of the book explaining New Jersey’s fiscal meltdown, Save Jerseyans. We symbolically broke ground for chapter #2 on Thursday at Stockton.

Regular readers know that we prefer to offer solutions, too, rather than only criticism.

My advice for the Governor with an eye on both policy AND political reality? There are plenty of places to cut in the current budget to find the necessary pension payment cash. We’re suffering from a crisis of will, not opportunity. You could’ve done more with your line item veto, it’s true. A good option at this juncture might be to call a special session of the legislature (you’ve done it before) before the pension payment cut lawsuit gets a hearing in Mercer County Superior Court at the end of June.

Regain the high ground! Start the conversation anew with elections at most levels of government power this year and next (and one a few years down the road that you may or may not be looking at). Galvanize your disaffected admirers on both sides of the political spectrum once again before the last moving fan to North Carolina gases up. It’s within your ability, and better yet, it’d be a legacy worth building unlike most of the GO bond’s projects.