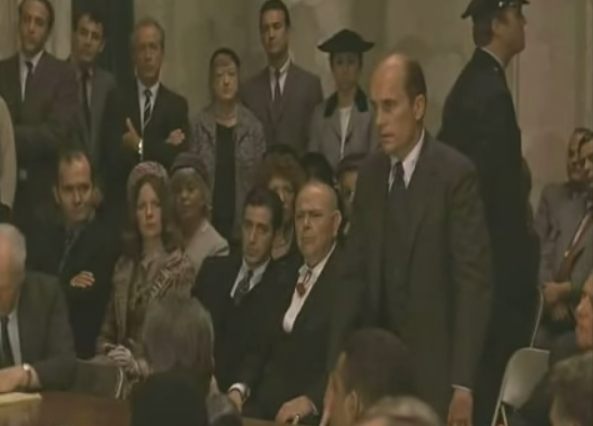 Regular Save Jersey readers are fully aware of my thoughts on the Bridgegate SCI’s value (or lack thereof), Save Jerseyans. It’s a joke, not a very funny one admittedly, and I think more people are waking up to it every day despite some folks’ torturous attempts to detect a story line worth belaboring. So why not try to laugh?

For starters, am I the only one who immediately recalled this ionic Godfather II scene (see below) when former Christie campaign guru Bill Stepien and his attorney joined the gallery during  Monday’s Kevin O’Dowd testimony?

…. the big difference between GFII’s federal investigation and Bridgegate, of course, is that there’s still scant evidence of any criminal conspiracy in this case permeating multiple levels of state governmental power.

A similarity? The legislative investigation in both instances is transparently motivated by the rivalry between warring camps.

The wait must seem interminable for those who’ve fallen under the toughest media scrutiny.

Today’s move by Stepien and his attorney was interesting to say the least. I’ve been told he and O’Dowd were never particularly close and may have even had a tepid rivalry as contenders for the chief of staff position (adding a level of irony to the “brothers” line above).

Stepien, whose tough style inspired little affection in many NJ GOP locals but who some in Trenton nevertheless insist is little more than a scapegoat, looked somewhat worn and tired today in stark contrast to his characteristic pre-scandal baby-faced appearance. He can’t plead a lack of good English to avoid testifying like Frankie Five Angels’s brother; he’s relying on the protections of the 5th and 6th Amendments to avoid the SCI’s snares while we wait for the deliberating federal grand jury to tell us whether this thing goes wide or stays within anticipated bounds in terms of Christie Administration collateral damage.

2 thoughts on ““It’s Between the Brothers””