Christie on NBC: “CDC was behind on this” 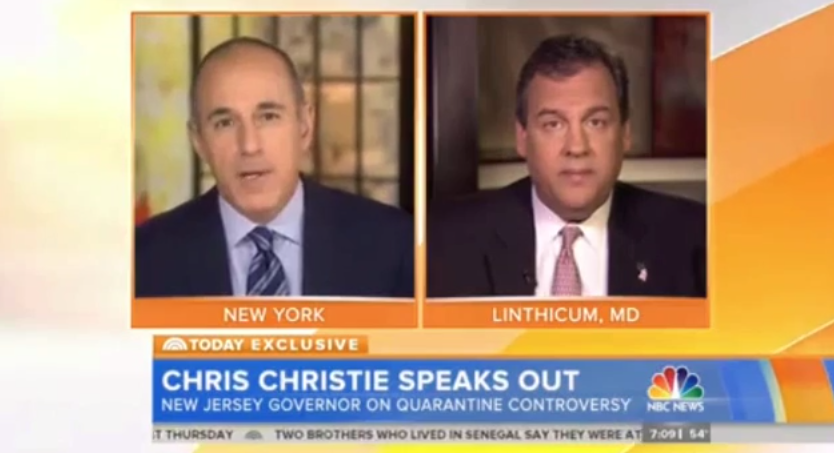 There are a lot of lies floating around out there right now about Governor Chris Christie, Save Jerseyans, lately on both the Ebola and RGA fronts, but we’ll continue to police the B.S. as best we can.

Of course, Gov. Christie didn’t need any help from us this morning on the Today Show:

Governor Christie: Good morning, Matt. How are you this morning?

Matt Lauer: I’m well. Thank you. You say you put these new rules in effect to protect the people of New Jersey. Along comes Kaci Hickox. She complained loudly about the treatment she received. Did you get more than you bargained for with Ms. Hickox?

Governor Christie: No listen Matt, I can’t imagine that anyone would find it to be an experience they were looking for, to have to spend three days in a hospital. I understand that. But the fact is, Matt, that she presented at the airport as someone who had contact, direct contact with folks who are infected with the Ebola virus and then she became symptomatic. The fact is that person has to go to the hospital, has to be treated. CDC ordered her to be tested for the Ebola virus based upon her symptoms. And then when she was no longer symptomatic and the tests came back negative, she was released to continue her quarantine at home.

Governor Christie: Well you used the word talented, Matt, not me. And secondly no, it had absolutely nothing to do with it. That’s been the policy all along. If she had never presented with any symptoms, our policy would have been to send her back to Maine and to ask her to quarantine at home in Maine. It’s because she presented with symptoms and then she was tested, and that testing was ordered, Matt, by the CDC in conjunction with the State of New Jersey.

Matt Lauer: The policy stays in effect now, right? The policy remains in effect. I want to read you what Dr. Anthony Fauci from NIH said yesterday. He called the mandatory quarantine of all health care workers who come in contact with Ebola patients in West Africa and then return, draconian. He said you and Governor Cuomo got it wrong. Dr. Kent Sepkowitz, an infectious disease expert said this: “[Christie and Cuomo] are both really smart guys, yet they have decided to ignore science, evidence and decades of careful observations made by those brave enough to have gone to Africa to assist in the control of these epidemics.” How do you respond to that?

Governor Christie: Well I’ll respond to it this way, Matt. First off, now 6 other states have joined us as well, both Republican and Democratic governors. As has the United States military. As has Dr. Bruce Buetler, a Nobel Prize winning physician who this morning said he favors our policy. The fact is that the CDC has been incrementalist on this. This newest guidance from my perspective is incredibly confusing and by the way, what’s the difference when someone is considered to be high risk? You don’t want them on public transportation. You don’t want them at public gatherings and you want them to work from home. That sounds like quarantine to me, Matt. Let me just finish this Matt.

Matt Lauer: Is it possible that you’re on the wrong side of science here but the right side of public opinion?

Governor Christie: No I’m going to be on the right side of both ultimately, Matt. And I understand that the CDC has been behind on this. Folks got infected in Texas because they were behind and we’re not going to have folks being infected in New Jersey and other states in this country. Governors ultimately have the responsibility to protect the public health and the public safety of the people within their borders when folks come in with this problem. And let’s be clear Matt, all we’re talking about is folks who have been directly in contact as healthcare workers with folks who are actively infected with the virus, not all travelers. The reporting has been very sloppy on this, Matt.

Matt Lauer: And yet a lot of people I talk to, healthcare experts say this, the best way to prevent new cases of Ebola from coming to the United States is to stop the outbreak in West Africa. You start attaching 21 days to the commitment of any healthcare worker who wants to go there and help the crisis there – isn’t that going to have a chilling effect?

Governor Christie: No it’s not, Matt, because these folks go over there because they want to help and they want to make a difference and we applaud them. But by the same token, when they’re in direct contact with people actively with the Ebola virus, asking them to quarantine at home for 21 days, unless they’re symptomatic, I don’t think it’s draconian. I think Dr. Fauci is responding, unfortunately, as are many other people from the CDC, in a really hyperbolic way because they’ve been wrong before, and now they’re incrementally taking steps towards the policy that we put in effect in New Jersey and now six other states have put into effect, and the Joint Chiefs of Staff have put in effect. We’re all wrong and they’re right, Matt? We’re trying to be careful, here. This is common sense. The American public believe it is common sense and we’re not moving an inch. Our policy has not changed and our policy will not change.

Matt Lauer: Real, real quickly, all this takes place about a week from the midterm elections. A lot of people would like to infuse this situation with politics. Will you say to me right now that there is no political blame to be assessed for what has happened with Ebola in this country at this point?

Governor Christie: Listen, Matt, I’m not here to discuss political blame. And when you look at what has happened here and the different states that have adopted this you’ve had both Republican and Democratic governors adopting this. Governor Dayton in Minnesota. Governor Cuomo in New York along with me in New Jersey. Governor Scott, a Republican, in Florida. Democratic governors in Virginia and Maryland where I’m sitting this morning. The fact is you’ve got more Democratic governors doing this than Republican governors. This is a nonpartisan issue, Matt. Here’s the bottom line as governor. My first responsibility is to protect the public health and safety of the people of New Jersey and I will not submit to any political pressure in doing anything less than I believe is necessary. We’re now backed up by the American military and a Nobel Prize winning doctor. I understand there’s all kinds of protestations from the CDC but we want stricter things than what they have been willing to impose and now they’re incrementally, Matt, moving towards our position. What’s the difference, Matt, between telling someone who is a healthcare worker at high risk that they can’t go into public places, they can’t go on public transportation, and we want them to work from home. What’s the difference between that and a quarantine? This is because they don’t want to admit that we’re right and they were wrong, I’m sorry about that.

Matt Lauer: Questions that will continue to be asked. Governor, I really appreciate your time this morning. Thank you so much.

7 thoughts on “Christie on NBC: “CDC was behind on this””