DeBlasio’s New York is Sinking Back to the 70s 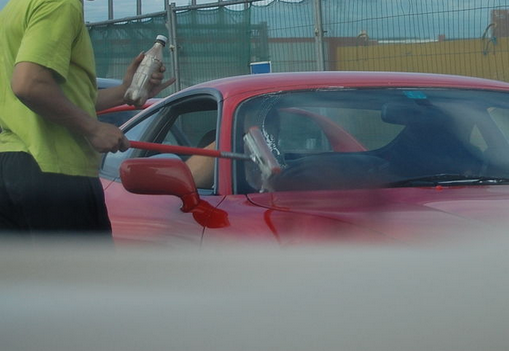 Sometime around 1980, when I was about thirteen years old, my Grandfather took me to the New York Auto Show, held at the New York Coliseum on Columbus Circle in Manhattan.  Before I left with my Grandfather, my mother warned me to hold his hand at all times, not to speak with or even look at anyone and to be careful.  I had little experience in New York City (a couple of class trips and a few visits to Madison Square Garden for family shows) and had no idea for the reason for her concern.  I had grown up near Manhattan, about 15 miles west, in suburban New Jersey, but Manhattan in the 1970s and 80s was a wholly different world despite its proximity to my hometown.

As we drove in, my Grandfather told me that we would drive through the Lincoln Tunnel, park at the Port Authority Bus Terminal and walk up 42nd Street before heading uptown on 8th Avenue to the Coliseum.  My Grandfather was born and raised in New York’s lower east side Italian ghetto and never passed up an opportunity to walk the streets of the city.  I looked forward to this walk with great anticipation.  I had seen commercials on television for a new Broadway musical called 42nd Street and imagined that 42ndStreet must have been the most wonderful place in the world.

When we got through the tunnel, we stopped at a traffic light and crazed-looking man wearing tattered clothes spat on my Grandfather’s windshield before proceeding to smear his discharge with a dirty rag.  For this “cleaning” job, he expected a tip, but the light turned green and my Grandfather sped off toward the Port Authority parking ramp.  Disgusting, I thought, but that was only the beginning.

We parked in the Port Authority parking deck and descended in the elevator to ground level.  When the elevator doors opened, I was struck by the foulest stench I had ever experienced; a combination of body odor, stale urine and death.  We headed to the exits by walking over, around and through rows of bums sleeping on yellowed newspapers.  After attempting to hold my breath for minutes, we were out of the hell hole and on the street, headed to the glory of 42nd Street.

By now I was white-knuckling my Grandfather’s hand.

After what seemed like the longest walk I had ever taken, we finally arrived at the New York Coliseum and I asked my Grandfather why New York was so filthy.  He replied that the city was too far gone and would never be a great city again because no one cared.  That was true in the 1970s when Abe Beame was mayor.

By the time I turned 17 and earned my driver’s license, things had not changed.  It was the 1980s, Ed Koch was mayor and my Dad was working at Kennedy Airport in Jamaica, Queens, as a supervisor of aircraft maintenance for American Airlines.  He carpooled regularly and one night, had to work overtime, meaning someone had to go pick him up at the airport after his shift to get him home.  That someone was me.

I drove from our home in Saddle Brook on I-80 eastbound, to the George Washington Bridge, a routine drive on a safe and clean interstate highway.  Upon crossing the bridge into Manhattan, I immediately noticed that the roads were covered with potholes and that the walls surrounding the highway were covered with graffiti and road grime.  I took the exit for the Harlem River Drive, the shoulder of which was lined with cars that were stripped, burned and propped-up on cinder blocks.  After crossing the TriBoro Bridge, I got on the Grand Central Parkway, which was also similarly polluted with the remains of stolen cars.  The Van Wyck to Kennedy Airport was no better.  Every now and then, you’d see a train pass overhead and they were all covered with graffiti.

I repeated this trip to pick my Dad up about once a year with similar sights.  It was also around this time that the film Escape from NewYork was released; the premise of the film being that New York had become so dangerous that the river crossings were demolished and the island turned into a prison colony.

That didn’t seem far from reality.  New York City, by 1992, under mayor David Dinkins, realized an average of just over 6 – SIX! – murders a day.  Times Square was the theater district, but one did not want to spend too much time there because the place was loaded with pickpockets and three-card monte dealers who regularly conned tourists out of their money.

In 1993, Rudy Giuliani was elected mayor and almost immediately began transforming the greatest city in the world from a place to avoid, rife with crime, to a tourist destination with one of the lowest crime rates among large cities in America, indeed, in the world.  The trains were cleaned-up, the squeegee men and crooked card dealers were prosecuted and homeless people put to work.  The murder total dropped from 2,245 in 1992 to 641 at the end of Giuliani’s term, in 2001.

Last year Bill DeBlasio (real name Warren Wilhelm, communist supporter), was elected as mayor.  Many people, myself included, predicted a return to the 70s-era crime wave for New York City because DeBlasio’s mayoral campaign was a campaign against police.  The results, predictably, have been astoundingly bad.

In just one year, the squeegee men have returned.  Today, the NY Post has reported that the three-card monte dealers are back as well.  Last week, two NYPD officers were assassinated after Al Sharpton’s marchers chanted for the want of dead cops.  Sharpton is most famous for promoting the fraudulent race cases of Tawana Brawley and the Duke lacrosse players.  Sharpton was marginalized by Giuliani and was kept away by Bloomberg, as well, but has found friends in both Barack Obama and DeBlasio.

It’s absolutely depressing to see New York City falling apart so fast.  Sadly, anyone under the age of 30 has no idea just how bad New York City once was, so they have no idea what path DeBlasio is leading them down.  I never thought NYC would return to the days when parents put their kids to bed in bathtubs to protect them from stray bullets, but that seems to be where we’re headed.

It does not have to be this way.  Those calling for DeBlasio’s resignation have to yell louder and more consistently.  They cannot relent.  They have to grow in size and scale.  It’s really New York City’s only hope.