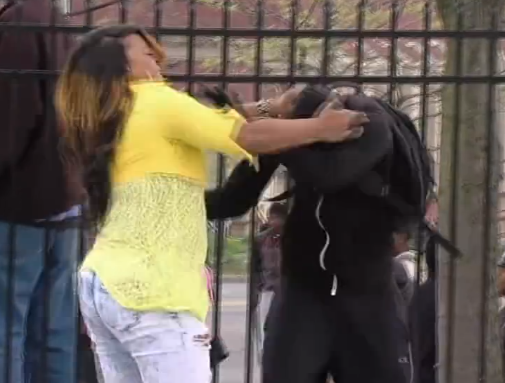 You’re living under a rock (or haven’t paid your Internet bill in the last month) if you haven’t see this viral video from the Baltimore riots, Save Jerseyans:

Here’s a mother (it’s been assumed she’s the mom but it doesn’t really matter who she is to this young man) desperately trying to save a teenage-looking kid from a life of a crime. She is literally trying to beat some sense into him before he hurts himself or someone else, most likely both. It’s symbolic of the struggle happening every single day on the streets of America’s most desperately poor neighborhoods.

But let’s not get wrapped up in the emotion of the moment and forget that generational poverty, of the kind you see in certain neighborhoods in Baltimore or Newark, is a symptom of bad policies and a dead culture, not the disease itself.

Plenty of desperately poor American communities have never rioted. My grandmothers’ families often had trouble finding dinner during the Great Depression, when access to public assistance and other resources wasn’t what it is today, yet somehow almost everyone got out of bed, cleaned themselves and their children, went to school, attended church, and swept the sidewalk to keep the neighborhood from falling to pieces.

This is different. Young millenials like the one featured in the viral video embedded above are statistically doomed in urban decay zones created, and then abandoned, by liberal economics and social engineering. And it ain’t grand jury members doing the killing.

How did it happen? I could run a blog devoted solely to this topic, but here are a few of the biggies extending back to the era of LBJ: (1) de facto re-segregation of schools by rejecting school choice reforms; (2) throwing billions of dollars at failing schools, monies that could’ve been better spent on school vouchers and infrastructure improvements; (3) emphasizing regulation, taxes, and raising the minimum wage and, in so doing, running businesses out of town and minimizing the availability of entry level jobs for young men (who, btw, are in the age cohort most likely to riot and commit crimes); (4) concentrating poverty with Great Society-era housing programs; (5) institutionalizing welfare and other public benefits as a way of life rather than a temporary vehicle of relief on the road back to work; and (6) hamstringing law enforcement in their ability to practice preventive policing.

The end result, again, is generational poverty. The kind that’s hard to shake. We saw it happen here in New Jersey, in cities like Camden and Newark: First, anyone who pays taxes and can afford to escape does. Next, a significant portion of the population turns to crime and, before long, drugs. More businesses leave. Soon, the only viable industry employing residents is the violent drug trade. An enormous percentage of homes no longer have two parents, or even one parent, to raise the kids and act as a counterbalance against what’s happening on the street and in the schoolyard. Incarceration rates begin to eclipse full-time employment. Bedrock, stabilizing American family values like faith in God, responsible sexuality, self-reliance, respect for property, responsibility to care for one’s family, basic patriotism and civic pride, and the value of education begin to disappear from the culture. And suddenly you no longer have a culture that’s recognizable in the developed world.

The Left’s two-fold response is familiar to all of us: (1) throwing MORE money at the failure factories, where in cities like Camden we’re already spending 50% more than it costs to attend a top notch prep school, and (2) manipulating a lost generation of rioting youngsters into believing that some rich, white, evil Republican living 100 miles away, or six states over, is keeping them down.

Then they blame the justice system.

And then the politicians give’em “space to destroy” themselves:

(Note: this mayor VETOED a police body camera bill back around Christmas).

It’s a cycle of death. The “the soft bigotry of low expectations.”

How many more kids must we lose before liberals admit they’re wrong?

Liberal talking point #2 (posted above before the mayor’s clip) is partially right; rich white Democrats, like FDR, LBJ, Ted Kennedy, Hillary Clinton, and their ideological progeny remain the single greatest obstacle to the socio-economic advancement of black America. It’s not politically correct to say, Save Jerseyans, but it’s the unvarnished truth, and I don’t have much patience for anyone who won’t own up to the reality of it.

Lying to ourselves isn’t going to help a mother in Baltimore save her son from jail or the grave. Is it?

20 thoughts on “How many more kids must we lose before liberals admit they’re wrong?”