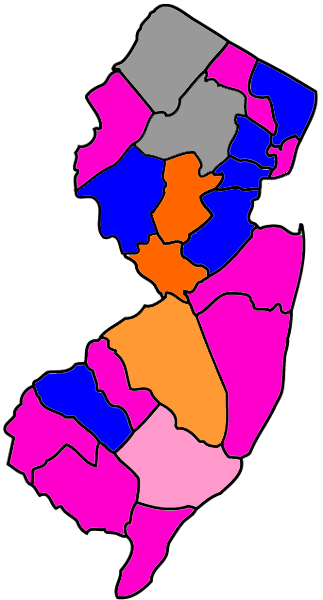 A lot you have asked me what the heck is going on with the N.J. gubernatorial primary.

There’s about 2.5 months to go but counties are voting and things are shaking out on almost a daily basis. It now looks to safe to assume that Joe Piscopo will not be participating in the GOP Primary. He’s either going to run as an indy or keep the ball in the air, for as long as he can get away with it, to make cash off of appearances and earned media.

So who’s leading? What’s “a line” and do they still matter? Etc. and so on.

Let’s take a couple of minutes to talk it over. Here’s a map (because who doesn’t love maps??) to kick off our discussion:

Orange – Jack Ciattarelli has the line

Light Orange – Ciattarell is a lock for the party line (Burlington votes tonight, 3/20)

Blue – Undecided and could still possibly go either way

Grey – No line to award

The line, for those who aren’t familiar with the concept, is the designation (awarded at either a convention or by some powerbroker’s fiat) permitting a candidate to run in the same column as the other “official” county organization-backed candidate. In a state with hugely expensive media markets and precious few Republicans with significant name recognition? The line is usually a major advantage. It’s also a much derided symbol of so-called establishment authority.

Thus far, Lt. Gov. Kim Guadagno has leveraged her prominent party position and years of personal GOP committee-level diplomacy to lock up the “line” in several counties which represented roughly 40.63% (excluding Atlantic, which votes Saturday and is almost guaranteed to back her) of Chris Christie‘s raw vote total in the 2009 gubernatorial primary (when he beat Steve Lonegan by a little less than 13-points).

Those numbers are provided merely to give you an idea of how things are progressing.

There are plenty of unknown variables.

For example, the “lines” aren’t always dispositive of how things are going to go. Bret Schundler won the GOP gubernatorial primary in 2001 “off the line” everywhere, and he did it by about 14-points. Jeff Bell won the 2014 U.S. Senate primary off the line, too, by smartly targeting likely voters with mail and robocalls in places where the line mattered for less (or nothing).

Even Chris Christie 1.0 managed to lose four counties — three of which had lines — to Lonegan despite having nearly universal party support in all 21 counties.

This year is a little different given that the two “prime” candidates – Guadagno and Ciattarelli – aren’t as well known to local Republican base voters as the crusading U.S. Attorney (Christie) and former AFP “Taxpayer Minute” activist (Lonegan). You can argue which candidate that situation benefits most either way. I’ve heard several versions of both arguments! Believe me. Could recite’em in my sleep.

Over the next couple of weeks? There are big prizes still on the table. Bergen County, for example, represents roughly 9% of the current statewide GOP primary electorate (though Kim is definitely looking scarily strong there after a lopsided Bergen screening committee vote).

Here’s how the last round of county battles are shaping up:

What you see below is a visualization of the likely “best case scenario” for Ciattarelli in terms of official party support through the end of the county screening/convention phase: 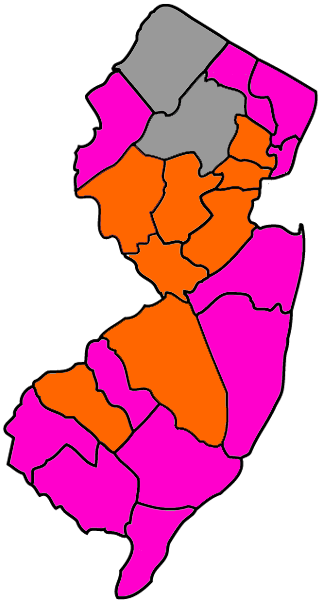 There are sooo many other variables to discuss, Save Jerseyans, and we can (and have, and may still) go into the weeds over the next several weeks. I’m not trying to analyze every wrinkle in this post (e.g. the implications of legislative primaries, chairmen feuds, possible Gilmore tax investigation narratives, etc.); only trying to give you a general overview of where things stand as of today.

Could a candidate like Steven Rogers of Nutley or Joe Rullo of Ocean County shock everyone and win off-the-line? Nothing’s impossible but, with actual “known” and relatively well-heeled candidates to fight, a pulling a Schundler or a Bell won’t be possible without cash.

The bottom line: without Piscopo to unsettle the race, Kim Guadagno remains the clear front runner by most traditional measures (lines, money, endorsements) but not quite as dominant as Christie was back in 2009.

Ciattarelli could win an upset if he can smartly target and poach thousands of primary voters in (1) Morris/Sussex where there is no line (see LD24 and LD26) and (2) counties like Bergen and Camden with “weak” party infrastructure and few county-wide “name” incumbents and, as a result, lines with inferior potency. That’s going to take money… a significant sum of it. And it’d be an easier road to travel if there were stronger ideological differences between the fiscally conservative but socially moderate-to-liberal lead candidates (both of whom declined to vote for Donald Trump last November). Instead, the discussion heading into June will necessarily revolve around (1) policy specifics, (2) personal records, (3) the usual personality differences, and (4) different visions for the post-Christie Republican Party.