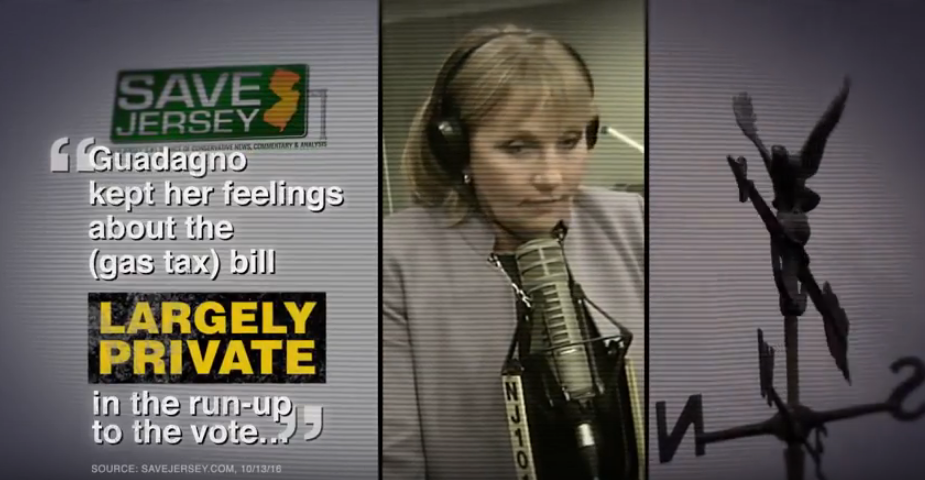 Last October’s historic gas tax hike is likely to remain an issue in this year’s election (and appropriately so), Save Jerseyans, and Asm. Jack Ciattarelli released a new 52-second web ad on Wednesday questioning whether his gubernatorial primary opponent’s present opposition is sincere. It’s the latest salvo in a rapidly escalating primary fight between the top two combatants and the factions supporting their respective bids to succeed Chris Christie.

“I refuse to be defined by a typical and desperate politician who is trying to mislead people about my record or anything else.  If the Lt. Governor thinks this nomination should be handed to her, she is mistaken,” Ciattarelli said in a statement accompanying the ad’s release. “I am in this to win, and will not cede even an inch of ground in my efforts to convince Republican voters that it is time for a new direction for our state and our party.  With that, the attached video should set the record straight with regard to the Lt. Governor’s position, as well as mine, on the 23-cent gas tax increase.”

As always, Save Jerseyans, I encourage you to use the brains God gave you and draw your own conclusions!

The public record? Because I’m determined to give you all of the facts?

Ciattarelli voted against gas tax hikes in June and then again in October of 2016. “We need tax reform in the worst way in New Jersey; this deal, however is not the way to do it,” he said at the time. Ciattarelli did push for an earlier version a New Jersey gas tax increase several years ago, in 2012 when he entered the Assembly, but has since argued that “[t]his new TTF deal… is more seductive than compelling,” given the immediate 164% tax spike.

Before 2016: “Yes,” Ciattarelli told the Star-Ledger last October. “I suggested in 2012 that there should be a couple penny increase, maybe a nickel, and do that in 2013 and 2014 as well. And that we should balance that with reducing costs. Instead we ignored the iceberg for four years, then hit it head on and asked New Jersey to accept a 23-cent hike overnight.”

On the other side of the battle line, Lt. Governor Kim Guadagno‘s criticism of the Christie-backed bill was muted throughout the legislative debate phase, with the LG stating only in general terms on NJ 101.5 that taxes hikes should never be a “starting point” for elected officials; however, she later came out swinging against the gas tax shortly after last October’s vote by the legislature but one day before Governor Christie signed the increase into law.

Guadagno spent the next few weeks working to defeat a ballot question designed to dedicate (and protect) the gas tax hike, including by making radio appearance and recording and dropping robo calls messages, a fight which brought her into direct and public conflict with her boss, Governor Christie, and his NJGOP campaign apparatus.