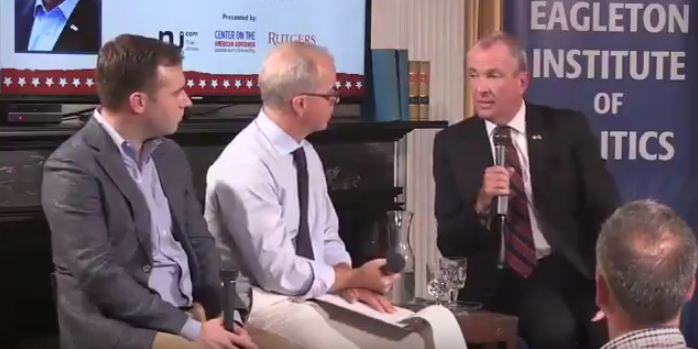 It’s one thing to be “soft” on illegal immigration.

That’s not spin, Save Jerseyans. That’s exactly what Phil Murphy (D-Goldman Sachs) said during this week’s online town hall sponsored by New Jersey media outlets, telling the Star-Ledger’s Leftist mouthpiece Tom Moran that “I’m not sure what the right point of with the right point of notification is” concerning reporting illegals to the feds, but “[m]y bias is going to be having their back.”

Click here if you don’t know the story of Jose Carranza. Do it.

Not that many of our politicians care. New Jersey (and many of its communities) are at the center of the so-called “sanctuary state” movement; Murphy had already said he’d take things one step further and found the first-ever in America, state-based “Office of Immigrant Protection.”

Tom Moran: I wanted to ask you about sanctuary cities. As I’m sure many of us remember that horrible day when four college kids were murdered in Newark were shot in the schoolyard execution-style. One of the people convicted of that murder, Jose Carranza was an undocumented immigrant from Peru. It turned out he had been arrested the year before for child rape and released on bail. Ann Milgram the Attorney General at the time issued a new directive that currently in New Jersey if you are arrested for a felony or drunk driving, our police are suppose to notify the federal government and immigration authorities. Many sanctuary cities won’t notify them until there is a conviction and drunk driving is or is not included. I wonder what you think about the current state of the laws is? Say it’s any felony or drunk driving and it’s at the point of arrest not the point of conviction?

Phil Murphy: I want to be honest I’ve got an answer I’m going to give it to you. This the first time I ever have been asked this question. I think context would be the field is so tilted against dreamers against newly arrived immigrant brothers and sisters. My bias is going to be having their back because there’s always going to be an example in any population of somebody who does something awful or whatever it is in this case and a heinous level and I’m not denying that but then we got to be careful not to extrapolate that and then throw a similar blanket over an entire a group of folks. So I feel like the field has been so tilted against these folks. I want to be the guy they feel like they can rely on. I have to think that through the point of notification one of the things we have said that we would establish immediately if this admittedly doesn’t get at this but it’s in the same neighborhood is an office of immigrant protection at the state level because one of the things going around the state admitted all this Muslim ban came up, I went to Newark Liberty and we had Cory Booker and I and a round table. The next one of the things you realize particularly depending on your status is you don’t know who to call or you here 10 different things and you’re not sure which one to believe. It’s so that’s one thing I wanted to say we want to basically clarify that to make sure there was one place probably more Legal Services than anything else where folks could get answers regardless of their status and without any recrimination. But on this one I like to come back to you. I’m not sure what the right point of with the right point of notification is this is, that we’ve got a whole group of folks here who were should have got the boot on their neck and it doesn’t feel right to me it’s unAmerican.