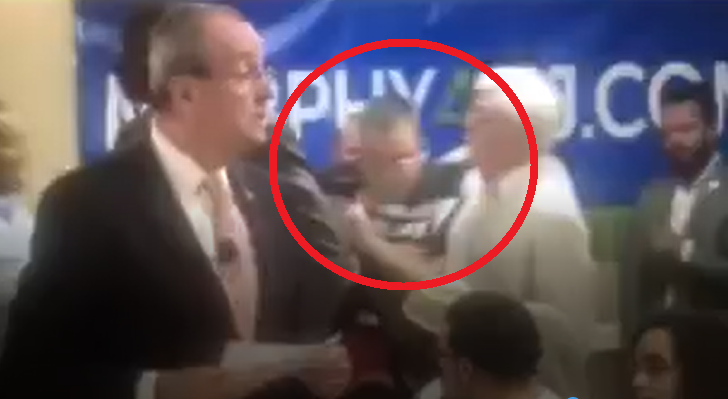 Kevin Tober, age 23, made this website’s 2016 30 under 30 list for his famously tireless work as a volunteer and operative for South Jersey Republican campaigns. Fearless by nature, Kevin also “tracks” for New Jersey GOP campaigns and organizations, showing up at public events to film Democrat candidates in action. Every significant campaign on both sides of the aisle employ trackers.

Things can get testy where trackers are concerned but never violent… at least until a town hall event this Wednesday night at the Hibernian Club in Hamilton Square.

The disturbing video posted below was grabbed by a Save Jersey reader from Democrat gubernatorial nominee Phil Murphy’s Facebook page before footage of the event was taken down without explanation.

It shows Tober, wearing glasses with cell phone in hand, getting shoved several feet across the room by an unidentified man as Murphy talks to attendees in the foreground:

“He came out of nowhere,” Tober explained when reached for comment, explaining that he was subsequently escorted from the building by staff for the Murphy campaign event.

The well-heeled Democrat nominee’s rhetoric has remained heated throughout the 2017 cycle, comparing Trump supporters to Nazis in one particularly infamous incident.

Murphy is nursing a 25-point lead over Republican opponent Kim Guadagno in the most recent public survey despite running on a historic $1.3 billion tax hike pitch in America’s most highly-taxed state.