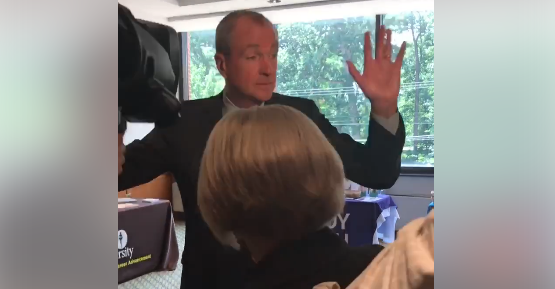 Democratic gubernatorial candidate Phil Murphy recently laid out his proposed plan for a series of costly tax hikes. Under Murphy’s plan, taxes would rise by $1.3 billion, according to estimates provided by campaign officials. Murphy proposes raising the personal income tax, legalizing and taxing the sale of marijuana, and changing the way personal and corporate income taxes are calculated.

Raising the top income tax rate will solidify New Jersey’s reputation as the highest taxed state in the country.

High taxes might be one reason why people are moving out of New Jersey. United Van Lines’ 2016 United Movers Study found that 63% of the people who contacted them for services were leaving the state. That’s the highest outbound rate in the country. Census migration data shows a similar story. For the last 5 years, more people have moved out of New Jersey than into the state.

New Jersey saw last year just how shaky the state’s revenue can be when it depends so heavily on top-income earners. When it was reported last year that one of New Jersey’s top taxpayers might move, state budget forecasters warned it could cause a $140 million revenue gap. Moreover, the top 1% of New Jersey taxpayers account for around a third income tax collections. Making this group pay more in taxes could send them packing to other states, further harming the state economy.

Beyond individuals, businesses could leave the state if Murphy’s plan for combined reported goes into effect. Combined reporting treats all affiliated businesses that a company owns as one taxpayer. Under combined reporting, a New Jersey company could pay taxes on businesses it holds in other states. Trying to tax a company’s out of state operations is a sure-fire way to make New Jersey less desirable for any companies thinking about moving here.

But in the long-run, combined reporting doesn’t even lead to more revenue for states — just more complexity. A study from the Indiana Legislative Services Agency found that the revenue impact from combined report “will decline to zero” in the long run.

Instead of raising taxes, a better approach would be to live within our state’s means.

New Jersey is expected to gain an extra billion dollars in revenue from its existing tax base. But apparently a billion dollars more isn’t enough. Instead, Murphy’s plan sets out to raise taxes by another $1.3 billion in one of the highest taxed states in the country.