After insulting his own district, Zwicker (D-16) makes up tax hikes to slander his challengers

After trashing (or inventing?) a marine veteran in his district, and then openly mocking a huge chunk of his district to a snooty Princeton audience, Asm. Andrew Zwicker has apparently decided that lying about his Republican challengers is his best shot at reelection this November.

The most egregious example: a recently-distributed mailer paid for by “Zwicker Freiman Poppe for LD16.”

“It appears that liberal elitist and self-proclaimed smartest guy in the legislature, Andrew Zwicker, has trouble with elementary school-level multiplication and division, and has a tough time reading, as well,” said Anthony Ranucci, the Republican Team’s Campaign Manager.

The Zwicker, Freiman, Poppe mailer at issue takes aim at Assembly candidate and incumbent Somerset County Freeholder Mark Caliguire, alleging how “…under his watch as Mayor of Montgomery, property taxes skyrocketed by 41%.”

Here’s a screenshot of the relevant part (with my red markings): 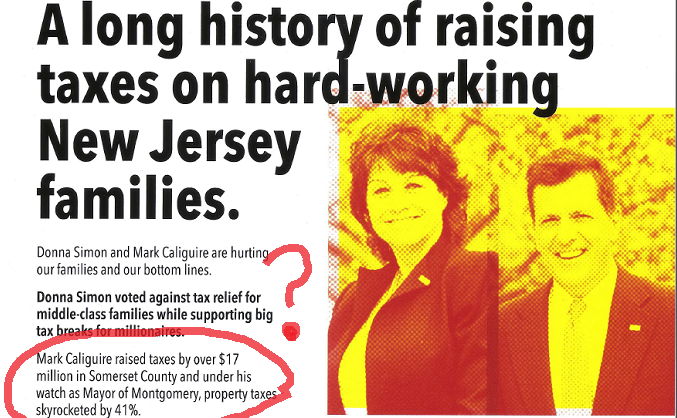 The only problem with Zwicker’s claim?

Contrary to having a “long history of raising taxes,” taxes stayed flat when she was a Readington Township Committeewoman; she did not vote to raise taxes during her brief sting as a State Assemblywoman, even earning “Taxpayer Hero” and “Defender of the Taxpayer” award from watchdog organizations.

“The Democrats completely false attack on my record in Montgomery is disgraceful, and they should publicly admit their error, apologize and retract their claims,” said Caliguire. “If they refuse, we will seek a legal remedy to stop them.”

We hope he does, folks. Elections are difficult enough without amoral snobs like Assemblyman Zwicker making things up.