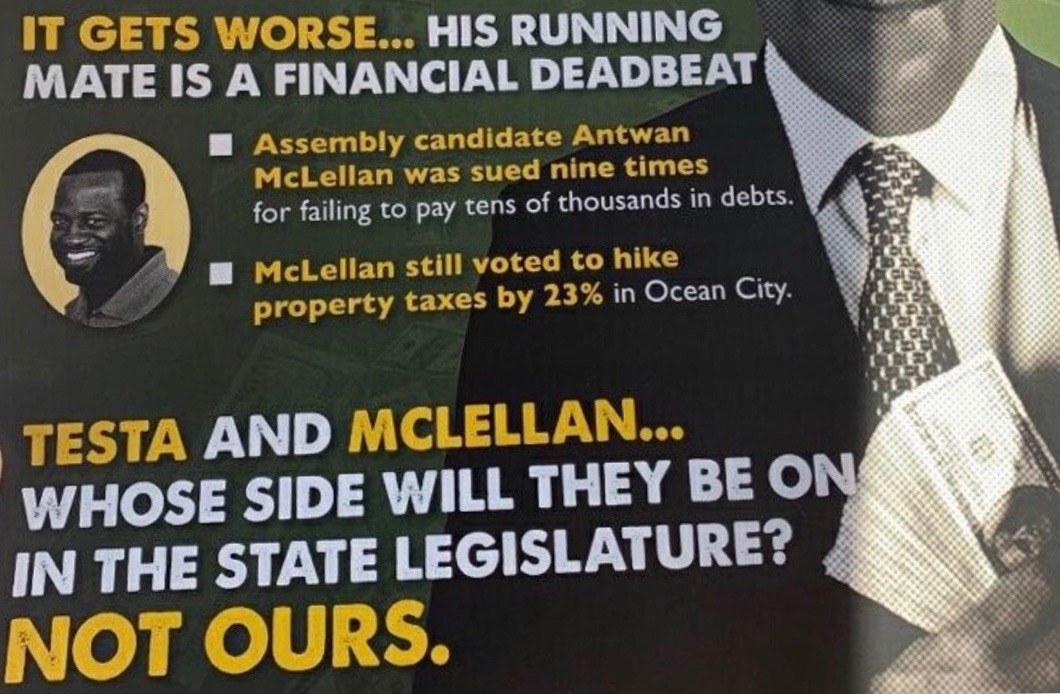 CAPE MAY COURT HOUSE, N.J. – If he’s elected to the General Assembly this November, Republican candidate Antwan McClellan would be the first black legislator to ever represent Cape May County, one of the principal counties of South Jersey’s sprawling First Legislative District.

The mailer at issue was produced by the South Jersey Machine-linked General Majority PAC which is currently bombarding financially-strapped GOP campaigns in battleground districts like LD1. The PAC has a long and successful history of dumping huge dollars into New Jersey legislative races to drown out Republican candidates with negative and sometime downright deceitful allegations.

Republicans say its LD1 piece attacking McClellan is a step beyond, representing nothing less than an example of vile race-baiting.

”The Democratic party claims to be the party of inclusion; however, the moment a person of color like me disagrees with their narrative, they launch an ad hominem attack, whip out their best ‘Aunt Jemima’ photograph and purposefully darken my complexion in order to suppress dissent,” said McClellan in a statement. “This attack ad launched against me isn’t just tone deaf, it’s totally deaf to the economic struggles that faced all the people of South Jersey in the recent trying economic times. I am a Republican because we support job creation and real opportunity not just giveaway programs. I know about that struggle firsthand and promise to diligently represent South Jersey to increase economic opportunities.”

“People that buy into this race-baiting narrative being advanced by the Democrats are just asking for more of the same lackluster representation and cronyism,” added Erik Simonsen, McClellan’s Assembly running mate. “I suggest that everyone, not just people of color, look closely into the thinking that spawned this attack ad and ask themselves if this is the representation they want.”

Republicans in the district remain confident that voters will see through the Democrats’ strategy down the home stretch of campaign 2019.

“The Cape May County GOP has worked hard to reach out to the African-American community and Antwan is without a doubt one of our brightest stars. To see him subjected to these kinds of racist attacks is extremely distressing,” said Cape GOP Chairman Marcus Karavan. “Unfortunately, these are the kinds of attacks you would expect from District 1 Democrats, who, to my recollection, have never run a woman or a person of color for the state legislature.”

LD1 encompasses all of Cape May County as well as portions of Cumberland County and Atlantic County. Having voted for Donald Trump in 2016, Republicans consider the district their best pick-up opportunity in the 2019 legislative election cycle and a critical precursor to possible success in the 2020 CD2 House election.