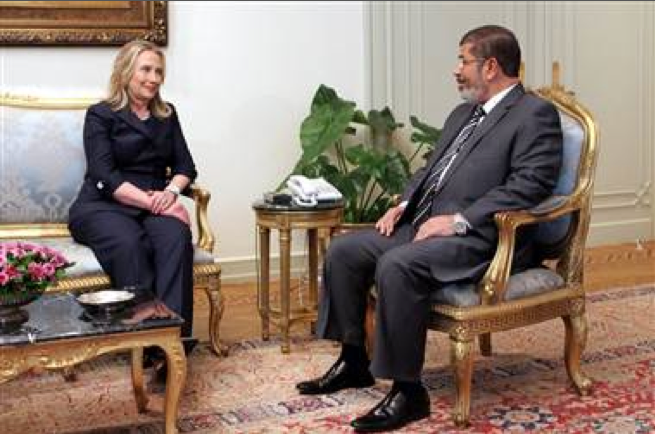 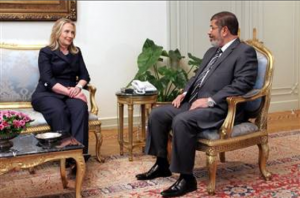 God only knows, Save Jerseyans.

They’ve chatted extensively over the past few days and, according to the President’s Deputy National Security adviser, Obama “commended President Morsi’s efforts to pursue a de-escalation.”

I’m wondering if our President managed to broach the topic of Egypt’s President’s unprecedented power grab during their convos; experts believe Morsi’s latest actions — accomplished by dictatorial fiat — will insulate his allies from judicial oversight and advance the Muslim Brotherhood’s efforts to replace traditional Egyptian law with sharia (Islamic law).

It’s part of a troubling though not at all surprising trend we’ve observed ever since Obama’s beloved Arab Spring decimated civic institutions in Egypt.

I consider myself a foreign policy pragmatist, folks. America often finds itself having to work with bad people in order to advance its interests and, ironically, its democratic principles around the globe. That’s part of a superpower’s reality. What’s so uniquely scary about Obama’s approach, however, is the naive over-reliance on his own personal diplomacy (read: “hubris” or “believing one’s own press” to an unhealthy extreme)…

This is the guy who gave the Queen of England (who has intimately known many of the world’s most talented modern figures, including Churchill) an i-Pod full of his own speeches!

We also remember his promise of increased post-election “flexibility” to Russia. It’s never smart to commence negotiations from a weakened position (as Obama had already done with Russia, undercutting our Eastern European allies by bagging the Bush-era missile defense program), but at least in Putin’s case, he more close fits the mold of a traditional despot. Extremely dangerous, yes, though his primary goal is personal aggrandizement. When the stuff really hits the fan, you can often find common ground with that type of international player. They’re generally not homicidal. They have limits. An ability to reason.

Can we say the same of Morsi?

Believe it or not, the Putin/Morsi comparison reminds me of a 2010 interview with the legendary British rocker Sting. The former Police lead discussed his 1985 “Russians” song which dealt with the threat of nuclear war and whether “the Russians loved their children, too” in order to help avoid it. The genesis of the song is quite interesting, as is Sting’s takeaway lesson decades later:

I had a friend at university who invented a way to steal the satellite signal from Russian TV. We’d have a few beers and climb this tiny staircase to watch Russian television… At that time of night we’d only get children’s Russian television, like their ‘Sesame Street’. I was impressed with the care and attention they gave to their children’s programmes. I regret our current enemies haven’t got the same ethics.”

And there you go, Save Jerseyans. Sting is no arch-conservative neocon, yet he can clearly appreciate the problem with treating radical Islamic leaders like Soviet-era bureaucrats. Trust me: Palestinian morning cartoons resemble Sesame Street in neither form nor substance.

Morsi is now the highest elected official of a transnational political movement whose stated goal is to install Islamic law as the “sole reference point for …ordering the life of the Muslim family, individual, community … and state.” The ties between the Brotherhood and Hamas are deep, intertwined and long-standing.

Does Obama need to take his calls? Perhaps. But should Obama delude himself into thinking this radical is just another pliable Mubarek? Absolutely not. And if he does anyway, don’t be surprised if the Obama/Morsi dynamic is one day regarded as an analogous relationship to the Chamberlain/Hitler relationship in foreign policy textbooks.