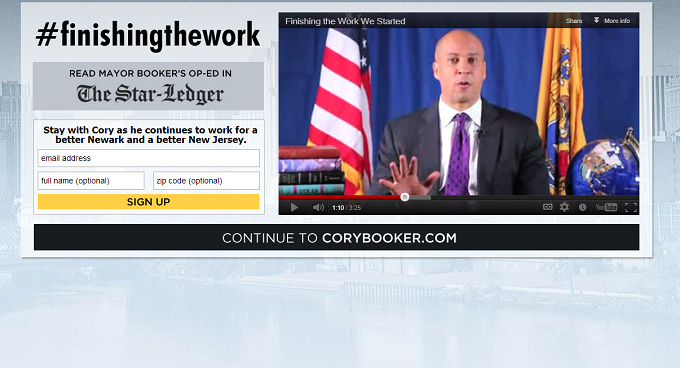 At least we now know which web domain will actually host a site, Save Jerseyans.

Having baked the idea of a gubernatorial run long than one of his signature YouTube sweet potatoes, NJ.com cited sources say Cory Booker (D-Newark) will pass, as expected, on a chance to challenge Governor Chris Christie in 2013. He’ll explore a run for U.S. Senate instead.

Staying true to form, Booker tweeted out a decision announcement delivered via a YouTube video (shared on his Twitter page) and posted on a new splash to his political page:

Hmmm… I wonder if anyone asked Frank about this?

And since when does Booker work?

Our pal Art Gallagher previously shared with Save Jersey the likely reasons for a Booker pass and the immediate consequences of his having done so for New Jersey politics. It’s no secret that early polling looked daunting for Booker despite his respectable name recognition statewide, and Governor Christie’s team did a great job of making such an uphill run appear as unpalatable as possible; going forward from today, Booker’s betting on an easier match-up in 2014 for U.S. Senate against an almost certainly less-well-known GOP opponent… assuming, again, Frank Lautenberg really retires.

It might be the right move for the ambitious young pol, but Booker’s move is problematic for the New Jersey Democrat Party both in 2013 AND 2014…

For 2013, the Dems face a very popular incumbent who won’t have to worry about money (and unpaid media) in one of the most expensive states in America to purchase paid media. Without Booker’s star power to guide them, Democrats are likely to field a “B” team candidate, as in Barbara Buono, who could lose in such a grand fashion that down-ballot Democrat candidates also suffer. A loss turned rout.

Then, after taking big lumps in 2013, Booker’s party may still fail to avoid a bruising and divisive primary battle… between the Newark Mayor and Frank Pallone? Or possibly even Steven Sweeney? Lautenberg’s retirement means an open seat, folks, and there are at least a few Democrats who would love to move up and capitalize on a one-in-a-lifetime opportunity for advancement.

So did Booker do what’s best for Booker by declining a showdown with Christie?

Or did he set himself up for Pallone/Sweeney to accuse him of being the new Rothman, i.e. a Democrat who should’ve fought the good fight (against Christie) instead of forcing a primary?