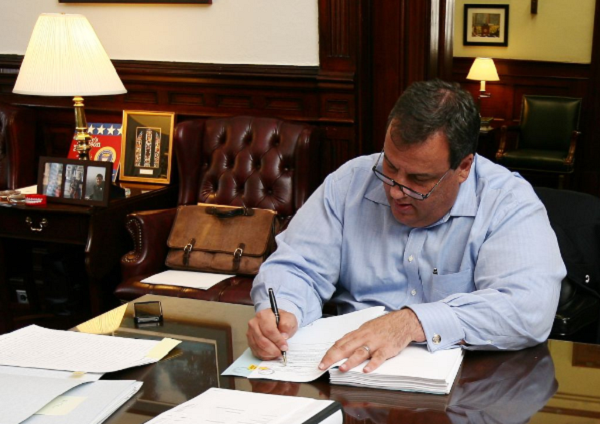 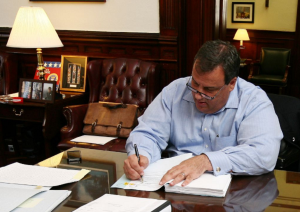 On the first day of his second term, Save Jerseyans, Governor Christie signed a host of leftover bills form the prior legislative session. Others were “pocket vetoes by the Guv, meaning they were left alone and, as a result, expired today.

S-1127/A-3791 (Greenstein, Whelan/Diegnan, Eustace, Wimberly) – Permits a board of education to adopt a salary policy of up to five years

S-2271/A-3460 (Whelan/Riley, Ramos, Coughlin) – Clarifies that a single State college may enter into a joint purchasing agreement with other contracting units

S-2636/A-3886 (Greenstein, Sweeney, O’Toole/DeAngelo, Benson, Bramnick) – Revises certain provisions of Megan’s Law and imposes monthly penalty on sex offenders to fund their monitoring and supervision by the parole board

S-2945/A-4545 (Vitale/Riley) – Increases from six to eight the number of governors of the Board of Governors of Rutgers, The State University needed to constitute a quorum

S-3127/A-4589 (Sweeney/Greenwald, Riley) – Revises the authorities of the Rowan University-Rutgers Camden Board of Governors and authorizes Rowan University to participate in public-private partnerships

AS for ACS for A-321wGR/S-2910 (Dancer, Singleton, Benson, Giblin, Mosquera/Sweeney) – Establishes study of technology for the tracking of domestic violence offenders; designated as “Lisa’s Law”

A-735/S-1438 (Eustace/Ruiz, Allen) – Permits a child who moves out of a school district due to a family crisis to remain enrolled in that district until the end of the school year

A-2899/S-1152 (Mosquera, Benson, Singleton/Weinberg, Stack) – Directs the Division on Women to conduct an audit of the coordination of community responses to domestic violence

A-3058/S-2210 (Ramos/Madden) – Requires Department of State to post on its website notice of days, weeks, and months designated by State law as special commemorations

A-3270wGR/S-2413 (Riley, Mainor, Giblin/Beach, Ruiz) – Requires Commissioners of Education and Labor and Workforce Development to study and report on departments’ efforts in providing students with information on employment in high-demand industries

ACS for A-3624, 3525/S-2643 (Eustace, Amodeo, C.A. Brown/Gordon) – Provides that participation by New Jersey residents in contests of skill does not constitute unlawful gambling

A-3764/S-3052 (Dancer, Chivukula/Van Drew) – Permits counties and municipalities to use snow removal reserve funds for clearance of debris following declaration of emergency by President or Governor

AS for A-4543/SCS for S-3075 (Spencer, Schepisi, Smith, Bateman/Whelan, Beck) – Authorizes extension of time for completion of remedial investigation of certain contaminated sites prior to DEP undertaking direct oversight

BILLS THAT EXPIRED WITHOUT GUBERNATORIAL ACTION:

AS for A-3323, 3324/S-2499 (Ramos, Burzichelli, Wimberly, O’Scanlon, C.A. Brown, Amodeo/Whelan, Addiego) – Requires each State agency to review permits issued by the agency and make necessary changes to expedite and facilitate permitting

A-3686/S-2527 (Stender, Benson, Coughlin, Chivukula, Jimenez/Scutari, Lesniak) – Permits two or more candidates for school board member to circulate petitions jointly and be bracketed together on ballot for same term